The most powerful Volvo V40 is the T5 engined version. Boasting a 2.0-litre petrol unit that produces 242bhp, it manages 0-62mph in 6.3 seconds, although in reality the car is irritatingly limited by traction issues, making its in-gear acceleration much more impressive. The car will manage a top speed of 149mph all out.

Despite the less impressive performance stats for T2 and T3 petrol engines (0-62mph times of 9.9- and 8.8 seconds respectively and top speeds of 121- and 130mph) they suit the V40 well and don't tax the chassis as much. They're ideal for drivers that spend most of their time in the city or at urban speeds. Those that drive on the motorway a lot will be more interested in the D2 and D3 diesels. The former is clearly focused on economy more than performance, as evidenced by its languorous 0-62mph time of 11.9 seconds. Ironically, specify that car in the sporty looking R-Design trim and it becomes slower again. The V40 D3 is more satisfying to drive and posts a respectable 0-62mph time of 9.6 seconds and a top speed of 130mph. 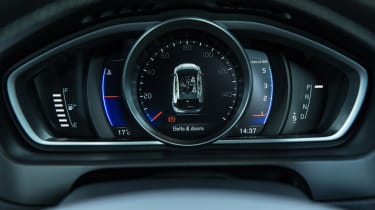 When powered by the D2 or D3 diesel engines, or by the T4 petrol unit, the V40 Cross Country accelerates just as quickly as the regular hatchback, though it's a little slower in D4 specification. Conversely, thanks to all-wheel drive as standard, the range-topping T5 Cross Country is quicker than the hatch to 62mph (taking 6.1 seconds). That's despite a 200kg weight penalty, underlining how traction limited the standard car is.