The Volvo V40 was always a good looking option in the class, making rivals like the Audi A3 and BMW 1-series look distinctly conservative. The changes in the 2016 facelift package were subtle as a result, being nothing more than a design amendment to align the V40 more closely with newer Volvo models.

The biggest change are those standard fit LED headlights with ‘Thor’s Hammer’ graphics. Alongside these, the front grille and the rear bumper have received a very subtle change, but that is about it. 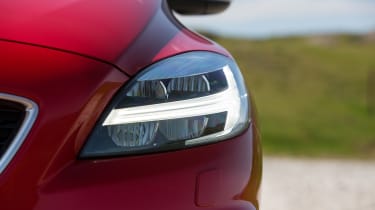 That sleek shape does compromise the V40’s practicality though, with the interior less commodious than in some rivals, but overall the V40 still looks good for its class. If there is one warning it would be that some brighter colours alongside smaller wheels can make the V40 look a little chunky, yet the flipside of that is bigger wheels do play havoc with the ride quality.

Overall, if you want a premium hatchback that isn’t one of the clichéd German offerings, the V40 is a pleasant, attractive and mostly accommodating option.