A well considered saloon, but not one for enthusiastic drivers 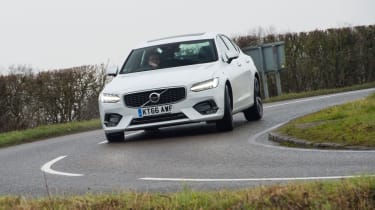 Volvo’s biggest, most luxurious saloon, the S90, has been treated to a tougher, more athletic look with the introduction of the R-Design trim to the range.

But rather than a comprehensive reengineering programme the new trim level is really just a light dusting of sportiness. The S90 gets a new bumper and grille, black exterior highlights, leather trimmed sports seats, black headlining, a perforated leather steering wheel and some metal pedals.

Volvo has remained typically Scandinavian and restrained with its R-Design trim and the changes are subtle and tasteful. Commendably it has resisted the urge to cover every available interior surface with carbonfibre and add red highlights to the edge of every surface. The downside to such subtlety is that, despite it being a very pleasant inside, it doesn’t really look all that sporty.

It’s not often you can include the phrase ‘leaf spring’ in a section about technical highlights, however the S90’s rear suspension creates such an opportunity as its composite transverse leaf spring deserves mentioning.

Rather than the antiquated multi-layered leaf springs of old, the S90 uses a composite spring that stretches across the width of the rear axle. Each end is connected to the lower suspension arm and the centre is then mounted to the body. The S90’s front suspension is a more conventional double wishbone and coil spring arrangement.

> Read our review of the Volvo XC90

The rear leaf spring is made from a polyurethane resin that’s reinforced with fibres to make it strong and lighter than a steel leaf spring or two coil springs. And, because the spring is flat and mounted low, it allows for greater boot space.

It’s essentially the same rear suspension that you’ll find on Volvo’s current XC90, but it’s far from a new idea for Volvo. Back in the late 90s Volvo used a composite transverse leaf spring on the 960.

Should you choose the optional air suspension, the rear leaf spring is replaced with two air bags. 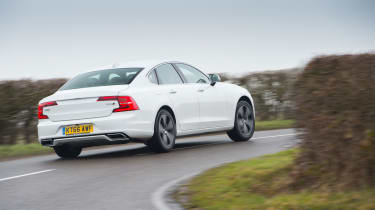 This is where the R-Design’s thin veneer of sportiness starts to crumble, as it’s only available with a 2-litre turbocharged four-cylinder diesel engine. There are two states of tune with the least powerful option, called the D4, putting out 187bhp and 295lb ft of torque. The more powerful D5 version, the one tested here, has 232bhp, 354lb ft of torque and comes with four-wheel drive. Irrespective of the power output, drive is sent through an eight-speed automatic gearbox.

The impressive torque figure of the more powerful S90 means that, despite weighing a hefty 1798kg, 0-60mph is dealt with in 6.7sec and it goes onto a top speed of 145mph.

Four-cylinder diesels are not the most evocative sounding engines. The S90’s is no different, starting with a clatter, and adding revs barely improves its acoustics. Thankfully though, the engine is pleasingly quiet and very well isolated from the cabin; it sounds much further away than it is and none of the uncivilised vibrations you might expect from such an engine make their way to the occupants inside.

The engine’s respectable torque and acceleration figures make promises that the S90, seemingly, cannot live up to; it is not a quick car. Out of corners it feels laboured and sluggish. It’s not entirely the engine’s fault and lot of the disappointing performance can be blamed on the gearbox. With the engine revving over 3000rpm there’s a significant delay before the next gear is selected; up changes are quicker at low revs but they are never sharp and crisp.

It’s the downchanges that cause the most issues. The gearbox doesn’t anticipate when the driver might need a lower gear and it doesn’t change down until you begin to accelerate out of a corner. Having to wait for the appropriate gear everytime you accelerate really exaggerates the engine’s lack of oomph.

You can change gears manually, but there are no paddles on the steering wheel, just the gear stick. To make matters worse, to change down you pull the lever towards you; the opposite way to most performance cars so it feels unnatural at best and at worst causes you to change up rather than down.

The S90’s Dynamic mode doesn’t really help, causing the gearbox to hold onto revs slightly but it doesn’t anticipate when you might need a lower gear any better. The mode also adds more weight to the steering, but it gives the impression of a very aggressive self-centering action rather than any additional tactility. There’s never any real feel from steering, and so the S90’s comfort mode feels appropriate most of the time.

It’s clear the S90 R-Design hasn’t been created to be thrilling, but what it lacks in excitement it makes up for in luxury. Most notable is how comfortable it is. 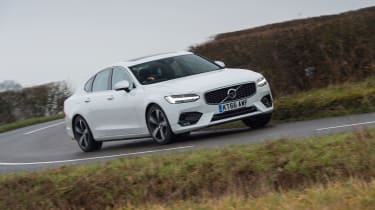 Its plush ride does mean that it’s very easy to make swift progress over bumpy and rough b-roads. The suspension absorbs the worst potholes and ruts while the wheels remain controlled and in constant contact with the tarmac. Such calmness and grip give you the confidence to maintain a decent pace down any road. Until you have to try and accelerate away from a corner, that is.

However, sharp crests and big undulations expose the S90’s bulk and it takes the suspension a while to eventually settle. Both axles take the brunt of the compressions well and keep the car from pitching or diving, but you still feel the effects of a large bump metres down the road.

Add some steering before it’s fully regained its composure and the S90’s safety systems will cut in abruptly. And not just the traction and stability control to settle the car, but, in more extreme situations the seat belt pre-tensioner is also activated.

When you’re driving along at any sort of speed and, out of the blue, the seat belt grabs you in a sudden rib-crushing bear hug it feels dangerously distracting rather than an effective safety device. But if it’s designed to be so unpleasant and borderline painful that it encourages you to slow down so you never trigger it again, then I suppose it does work.

Unfortunately for the S90 its rivals all offer a more engaging drive without sacrificing comfort. The Jaguar XF is charming if slow with the smaller engines and Audi’s A6 feels robust and secure, even with just two-wheel drive. But the Audi and Jaguar feel old by comparison to the recently updated Mercedes-Benz E-Class and BMW 5-Series. The Merc feels luxurious, helped by its mini S-class looks and interior while the BMW feels balanced and lithe. However, the S90’s interior is more stylish than any other executive saloon. 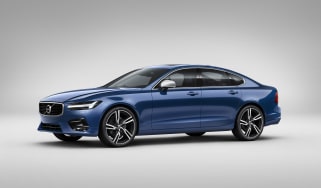 Volvo's latest luxury saloon and estate get the sporting treatment, with R-Design touches inside and out
Visit/volvo/s90/17071/2016-volvo-s90-breaks-cover-ahead-of-detroit-debut 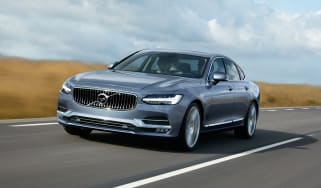 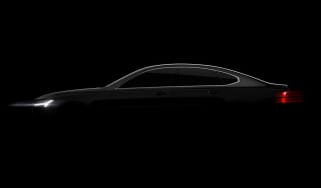