The Volvo Concept Estate is a good looking, sporty take on the shooting brake 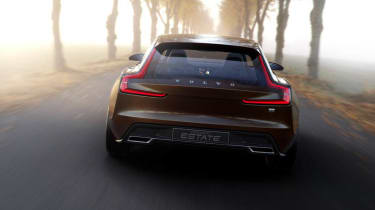 Volvo has unveiled the third and final car in its latest concept series by releasing images and videos of its Concept Estate. Painted in a brown hue, the car shares its basic exterior design with the Concept Coupe that was revealed at the Frankfurt motor show in 2013. But with the Concept Estate, the rear sweeps sharply down in typical shooting brake style to reveal the car as a muscular three-door estate.

With a long rear passenger window and sleek, low roofline, the concept clearly harks back to the P1800ES shooting brake from the early 1970s. The 2014 Concept also features Volvo’s latest futuristic design language, with T-shaped headlights and broad hips ensuring it isn’t just an updated tracing of a classic.

Inside is where the Concept Estate has undergone most development however. Featuring exclusive materials and cutting edge technologies, the dash is vacant of traditional buttons, in their place is a large tablet-inspured touch screen. Providing passengers with phone connectivity, satnav and a raft of useful information for a journey, it hints at the functionality of Volvo’s future interiors, with a first application expected in the all-new XC90 4x4.

Contrasting this futuristic digital technology is the use of more traditional craftsmanship and materials. Teaming up with Swedish fashion designer Kasthall, Volvo has created what it believes is a cabin to represent Swedish design and lifestyle, with woven wool carpets, tanned saddle leather, naturally aged wood and machine copper details offering both luxury and contemporary appearances. The boot even comes with a pair of Stutterheim raincoats and a ‘kubb’ game set to really bring the idea home.

No details have been released about what power plant the Concept Estate will feature, but the Concept Coupe used a 394bhp petrol-electric plug-in hybrid setup.

The Volvo Concept Estate will be unveiled to the public at next week’s Geneva motor show.