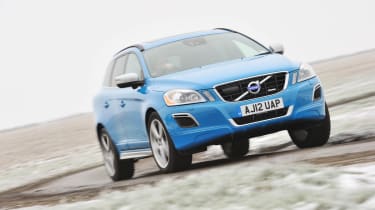 What is it? The Volvo XC60 Polestar. It’s not a madcap performance SUV, more a mildly tuned version of the more cooking D5 diesel version. The upgrade costs £660, while XC60 D5s start at £34,245. Technical highlights? This Polestar upgrade pales in significance next to a 400bhp C30 hot hatch, but it’s not without merit. An ECU tweak sees the 2.4-litre five-cylinder turbodiesel’s power rise from 215bhp to 230bhp, delivered at the same 4000rpm, while torque climbs from 310lb ft @ 1500-3000rpm to 347lb ft @ 1750-2250rpm. Your XC60 can be fettled at official Volvo dealers, meaning your car’s warranty is unaffected. Similar upgrades are available right across the Volvo range, on petrol and diesel engines, and can be ordered new or retrofitted during a service. What’s it like to drive? The engine is the star here; its warbling five-cylinder soundtrack has an obviously diesel edge to it, but it makes a far more interesting noise than its typically four-cylinder engined rivals. The peak powerband feels as narrow as the specs suggest, but there’s still plenty of punch in each of its gears (our car was fitted with a manual, though an automatic is probably more at home in a car like this). It’s an engine suited to carefree progress rather than ragging to its red line. And so it goes for the rest of the XC60’s dynamic character. No matter how wild it looks in Rebel Blue and sporting Volvo’s aggressive R-design kit, this is no sports SUV to battle the best BMW X3s and Audi Q5s. You’re never in any doubt of its 1.7m height or 1847kg kerbweight, with notable body roll if your inputs are enthusiastic. Good pedal feel, well-weighted (though fairly feel-free) steering and a surprisingly appealing manual gearbox mean it satisfies when driven at a smoother pace, though.  And the ride quality deserves flagging up – Volvo treads a very different line stylistically to its German competitors, and so it goes for the suspension. There’s no unnecessary ‘sporty’ firmness, rather a composed, cossetting reaction to all but the cruellest of bumps. How does it compare? The small SUV class is one of the most hard-fought – Audi Q5, Land Rover Freelander, Honda CR-V, VW Tiguan and (soon) Porsche Macan just some of its competitors. The driver’s choice for now, though, ought to be the BMW X3. An xDrive 30d SE – with a smooth 254bhp/413lb ft straight-six turbodiesel – costs £37,900, £2k more than an XC60 D5 R-design Polestar, which is behind on power. Anything else I need to know? The Polestar upgrade costs £660, and looks better value than fitting a £750 Digital TV or £1200 sunroof. Rebel Blue paint is a £300 option – a no-brainer if you want your XC60 to stand out but a potential moot point if you’re considering depreciation. And while the D5 manual’s claimed 49.6mpg sounds fantastic, in mixed driving we couldn’t top 35mpg.