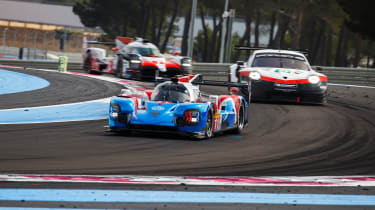 Only a week before the curtain-raising race of the 2018/19 World Endurance Championship season at Spa-Francorchamps, SMP Racing has revealed that Jenson Button will join its driver line-up. However, the former Formula One World Champion will have to wait until the second round, at the 24 Hours of Le Mans, to make his debut.

Button will share driving duties over the course of the season with Mikhail Aleshin and former F1 grid-mate Vitaly Petrov. The trio will pilot the number 11 car, one of two cars entered by SMP Racing in the flagship LMP1 category.

They’ll be competing in the BR1, which has been co-developed by BR Engineering and Dallara, the latter having also supplied the carbonfibre monocoque chassis. Mounted within the car’s wheelbase is a twin-turbo V6 that channels over 700bhp to the (magnesium) rear wheels via a sequential six-speed gearbox. To keep all that performance in check, carbon-ceramic brakes built by Brembo are also fitted.

Speaking of Jenson’s signing, SMP Racing founder and leader Boris Rotenberg said: ‘I’m happy to welcome Jenson Button as a part of our team. He is a top-level driver and Formula One Champion.’ Talking about his new challenge, Button said: ‘I’m delighted to be a part of the SMP Racing team in the FIA World Endurance Championship.’

SMP Racing is one of a small handful of teams competing in the LMP1 class, the existence of which has been brought into question in recent times as many manufacturers (works teams) opt to deploy their motorsport resources elsewhere.

However, Toyota remains in LMP1, and this provides cause for excitement, because it means that Fernando Alonso, who’ll be driving for the Japanese marque, will once again line up on the grid alongside Jenson Button. The prospect of these two F1 stalwarts striking up a rivalry is one we at evo are praying for.