Fernando Alonso has secured a seat with Toyota Gazoo Racing for the forthcoming WEC season. 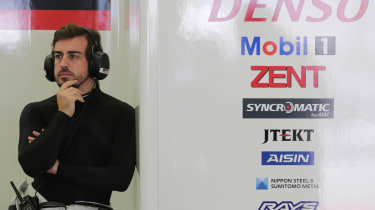 Fernando Alonso has been named in Toyota Gazoo Racing’s driver lineup for the 2018-19 WEC and will make his debut at the Le Mans 24 Hours. Alonso will assume a bit part role with his F1 commitments taking precedence, preventing him from entering all eight rounds of the WEC campaign.

Alonso will share driving responsibilities for the No.8 Toyota TS050 Hybrid with Sebastien Buemi and Kazuki Nakajima over the course of the season. Following the announcement Alonso said, ‘I am very excited to participate in the Le Mans 24 Hours for the first time. It is a race which I have followed closely for a long time and it has always been an ambition of mine to drive in it. ‘Endurance racing is a different discipline and it will be an interesting challenge.’ ‘It will be a learning curve for me, but I am ready for this challenge and can’t wait to get started.’

Toyota is yet to issue a comprehensive list of the WEC rounds Alonso will participate in, but it’s safe to say he’ll have a busy 2018. If Alonso enters the first two rounds of the WEC, his schedule will see him contest seven races over eight weeks, from April to June, across the two disciplines.

Akio Toyoda, Toyota Motor Corporation President, said: 'I am looking forward to seeing how much Toyota Gazoo Racing will grow when our drivers and all team members take what they have learned thus far in endurance racing and add to it what they will gain from Fernando’s experience. The entire team is excited about this opportunity for growth.'

This won’t be the first time Alonso has stepped outside the F1 paddock looking for a motorsport challenge. Only last year he competed in the Indianapolis 500, however, his Indycar debut ended prematurely due to a mechanical failure. The Honda engine powering his Andretti Autosport car suffered terminal problems with 21 laps remaining. Over the course of the race Alonso lead multiple times and captured the fastest average lap time up until his DNF.