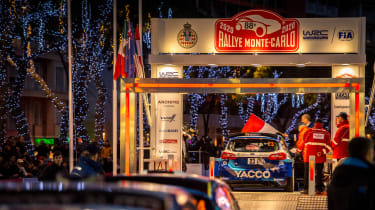 Hyundai Motorsport wrapped up the 2019 manufacturer’s championship and plans on continuing this momentum with the driver’s champion Ott Tänak joining the team from Toyota Gazoo Racing. He’ll be joined by last year’s runner-up Thierry Neuville, who traded blows all of 2019 in their fight for the driver’s title.

The third works Hyundai will be driven by two different drivers throughout the year, but far from being a fill-in, this third car will have some recognisable names at the wheel. Sébastien Loeb, the most successful WRC driver ever, will be a part-time driver for the South Korean team, with Dani Sordo, his former teammate during Loeb’s dominant years behind the wheel of the Citroën C4 WRC car, also filling in.

Hyundai’s i20 N Coupe WRC car, like the Toyota, is also a slight update on the versions that came in the major rule change of 2017, and Hyundai isn’t far away from revealing its own road-going version of the next-generation model. Rather than being a distinct homologation model, Hyundai will instead base its next WRC car on the new-generation i20 hatchback, itself due to arrive in a hot i20 N form that will be similar in execution to the excellent i30 N. That model is expected to be seen later this year, in N form or not, but it will give us a good idea of the new models ready to hit the rally stages in 2021.