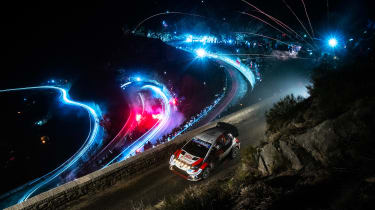 Toyota Gazoo Racing is coming off the back of a successful driver’s championship in 2019, but Ott Tänak will not be defending his title from inside the Yaris WRC car. Instead, his move to Hyundai Motorsport has opened the door for Frenchman Sébastien Ogier coming in from the now defunct Citroën team. Joining Ogier is Welshman Elfyn Evans who’s made a move from M Sport. Kalle Rovanperä will pilot the third works car.

The 2020 Yaris WRC is mostly unchanged from that of 2019, which itself was only a gentle evolution of the last major regulation change that came into effect in 2017. This will be the last year Toyota Gazoo Racing uses the familiar Yaris car though, as of 2021 it’ll introduce a new car based on the recently revealed GR Yaris – a road-going homologation model that was designed and engineered specifically to accommodate the requirements of a WRC rally car.

Toyota Gazoo Racing announced upon the reveal of its lightly updated 2020 WRC model that it’s focus was on improving the engine’s performance, and trimming and refining the aero based on the 2019 package – these subtle changes are not surprising considering the all-new GR Yaris car next year.