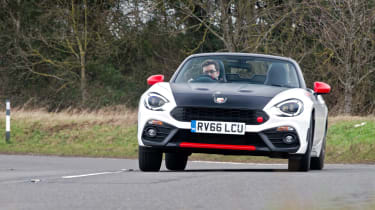 Owning a 124 Spider shouldn’t, in theory, be too financially ruinous. Official combined economy is 44.1mpg, rising to 42.8mpg with the automatic transmission. The former figure is identical to that of the regular Fiat 124 Spider, so you lose nothing in frugality for your performance gains, and it’s a fraction better than the 40.9mpg claimed of the 2-litre MX-5.

Turbo engines can be rather thirsty in the real world however, even small capacity ones, so a figure beginning with a three may be more likely unless you ignore the goading character of the Abarth’s noisy exhaust. 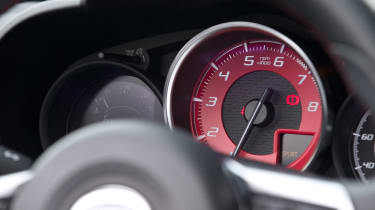 The decent on-paper economy does keep CO2 to a minimum, at 148g/km, so from April 2017 onwards you’ll pay a first-year rate of £200 and a standard rate of £140 a year thereafter. That first year rate is more than the £145 you’d have paid before, but after that it’s actually £5 a year less than it would have been previously.

In our experience with the similarly flyweight MX-5, you shouldn’t chew through consumables too quickly either, provided you don’t spend half your life on track. Rear tyres might get a workout, but the brakes should last a while. Service intervals are a little more strict than that of the Mazda’s 12-month, unspecified mileage – the Abarth requires servicing every 9000 miles or 12 months, whichever comes soonest.