Abarth has taken Fiat's 124 one step further with retro details and a powerful 1.4-litre turbo engine 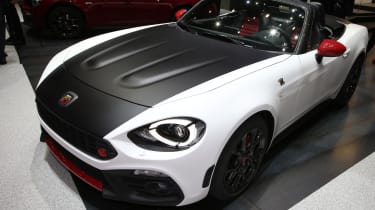 There can be few better starting platforms for a new rear-wheel drive sports car than that of the current Mazda MX-5, and that’s exactly what Fiat used when it unveiled the new 124 Spider.

Now, Abarth has unveiled an even hotter variant of the turbocharged drop-top in Geneva, packing a 168bhp version of the four-cylinder, turbocharged 1.4-litre used in the Fiat version. A six-speed manual gearbox is standard with an optional paddle-shift auto, and the company promises a ‘beautiful growling sound’ from its ‘Record Monza’ exhaust system.

In Abarth configuration, the 124 works with a 1060kg kerb weight and – like the Mazda on which it’s based – has a 50/50 weight distribution front to rear.

It uses the same suspension layout too, with double wishbones up front and a five-link setup at the rear, but Abarth has tuned the suspension to its own specification, with stiffer anti-roll bars and ‘Abarth by Bilstein’ dampers. Wheels are 17-inch.

A limited-slip differential is also used, and Abarth is keen to highlight the car’s throttle-steerability, letting the driver disengage the car’s traction and stability control. A 6.8-second 0-62mph time is also promised, as well as a 143mph top speed.

While the car’s mechanical setup is of interest to keen drivers, it’s the styling that most will notice first.

By and large, it’s the same shape as the Fiat 124 Spider on which it’s based – a shape that looks good from some angles, but fails to gel from others. However, Abarth has applied its own treatment to the car’s lines, with a notable retro feel.

The bonnet and bootlid are both painted matt black – a nod to the original rally cars, which featured a matt black bonnet to cut down on glare. Those details contrast with the five body colours – Turini 1975 White, Costa Brava 1972 Red, Isola d’Elba 1974 Blue, Portogallo 1974 Grey and San Marino 1972 Black.

There’s Alcantara trim in the cabin, courtesy of Officine Abarth, and that throaty exhaust system. The firm goes as far as fitting a metal plate to each car to mark each 124 as having been certified by an Abarth technician. 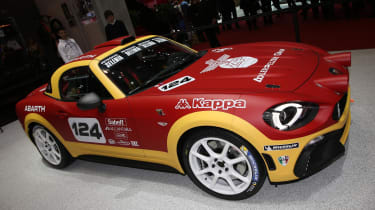 If none of that is quite retro enough, Abarth also presented the car in full rally style at the show, complete with a classic yellow and red livery, spotlights and stripped-out interior.

Official UK pricing hasn’t been revealed, but Abarth quotes a 40,000 euro entry point for ‘all Europe’ (about £31,200 at current exchange rates) when the car goes on sale in September.

Catch up with all the latest Geneva motor show stories and videos on our hub page. 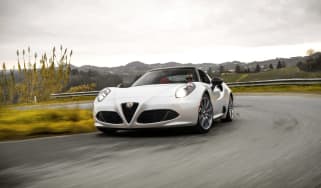