From airbase to racetrack, Bedford has become a real success in the trackday field 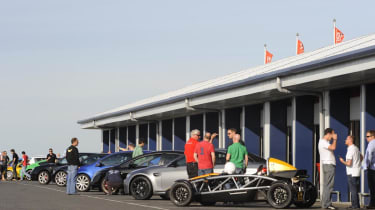 The site upon which Bedford Autodrome sits was originally an American airbase during the second-world war and was later a Royal Aeorspace development centre. As of August 1999, with owner Jonathan Palmer having acquired the lease to develop Bedford Autodrome, its main role has been of acting as a corporate and private individual driving venue run by Palmer Motorsport.

Palmer Motorsport is the corporate motorsport experience company set up and run by Jonathan Palmer. Palmer is a former Formula 1 driver, who also raced at Le Mans and in British Touring cars. He used Palmer Motorsport to set up the Formula Palmer Audi Championship, which has had drivers such as Justin Wilson and Andy Priaulx pass through its ranks.

With Bedford Autodrome having proven to be such a success, in 2004, under the banner of Motorsport Vision (MSV), he acquired Brands Hatch, Outlon park, Snetterton and Cadwell Park from Octagon. Since this venture, The Company has acquired the commercial rights to British Superbike Championship and BRDC Formula 4 amongst other championships and their MSV track days.