The Alfa Romeo SZ featured a headlight design many considered to be unsavoury at its launch, but it only improved with time 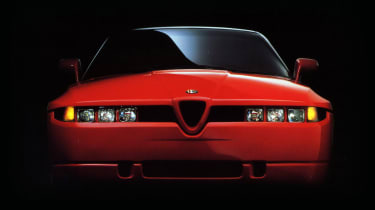 One, not unreasonable, theory on why some of us bond with cars from a tender age is that, like us, they have frontal features recognisable as a face: a nose, a mouth and two eyes. The urge to personify headlights in particular is understandable: they allow us to see where we’re going at night. Some Fiat 500 owners helpfully apply stick-on eyelashes to their cars’ headlights to emphasise the point.

In the (often dim) and distant past, all cars had round headlights, the very first ‘fuelled’ by acetylene or oil which gave off a lovely waxy yellow glow, similar to the gas street lamps of the time. Electricity changed everything, of course, giving rein to evolving illumination methods – tungsten, halogen, xenon, LED – that not only brightened our lives but, along with advances in plastics and glass, afforded car designers the freedom to fashion ever more aesthetically arresting headlights.

Where once cars were lumbered with a look of wide-eyed surprise – or frog eyes in the case of one small British sportscar from the ’50s – headlights became such a potent feature of a car’s ‘expression’ that nothing less than the automotive equivalent of a Clint Eastwood scowl was required for anything with a performance remit. In recent years, it’s almost as if designers have begun to believe headlights are the window on a car’s soul and that conspicuously dazzling, high-tech complexity denotes a sense of sophistication and advanced engineering throughout the rest of the car. Key to this has been the move towards increasing numbers of small, high-intensity elements, a trend that (maybe) has come to a shuddering hiatus with the Alfa Romeo 4C’s bi-LED ‘bug eyes’, each light unit comprising two small bulbs and an additional five much smaller ones – now, following an unprecedented backlash, replaced by simpler units less upsetting to arachnophobes.

But then Alfa was also responsible for the car that arguably prefigured the move towards smaller multiple light sources as a form of design jewellery. The unforgettably twisted SZ, or ‘Il Mostro’, used clusters of three small headlights, the size and shape of square cream crackers, set into a shallow full-width grille flanking the Alfa shield. Launched at the 1989 Geneva show, the now iconic composite-bodied coupe was branded ugly by most critics and hideous by some. Those initial knee-jerk verdicts seem harsh with the benefit of hindsight, though, especially when the fashion for pretty-pretty cars has faded. The SZ may still be something of a curiosity, but it was ahead of its time in many ways and, today, those old-tech headlights somehow look just right.