Alfa Romeo Giulia review – has the compact exec segment got a new leader? 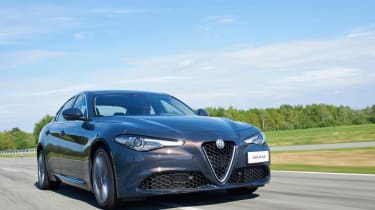 There has been much said about the new Alfa Romeo Giulia, but whereas most of the attention has been levelled at the M3-rivalling Quadifoglio, the cooking Giulia models are if anything even more important, as these are the cars that need to appeal to a far wider audience.

Launching with a suite of four turbo petrol and turbo diesel engines, the new Alfa Romeo Giulia is finally adding an Italian option to the compact executive market, previously dominated by the big German manufacturers and occasionally infiltrated by Jaguar and the Japanese pair Lexus and Infiniti.

As compact executive rivals are stronger than ever in their latest iterations, Alfa Romeo can no longer afford to merely get by with recycled platforms and hand-me-down engines. The Giulia's platform is all-new (and shared with another new volume model, the Stelvio SUV), its engines freshly developed for this car, and it sends its power, like the majority of cars in this class, to the rear wheels.

Fittingly, Alfa Romeo's effort has paid off - and whether Quadrifoglio or not, this is one of the best cars the company has produced in a very long time. While it lacks polish in places, its talented chassis, strong engines, light weight and improved quality all make this a very competitive offering. 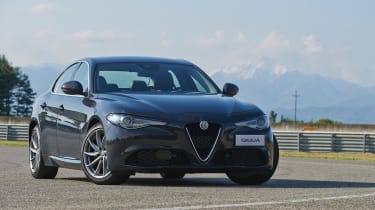 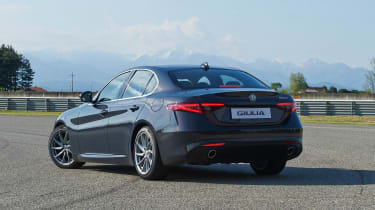 Priced from £30,000, the Giulia is pitched at the premium offerings in the compact executive segment, which is dominated by German brands. The Giulia range is divided into five trim levels, bookended by the base and Veloce models.

Standard kit on the entry-level model comprises a multifunctional steering-wheel, automatic emergency braking and rear parking sensors, with a 6.5-inch screen mounted on the centre console for the informtainemt system. The base trim is exclusively powered by the 197bhp, 2.0-litre four-cylinder petrol engine.

The diesel-only Tecnia benefits from a suite of extra tech functions, courtesy of three factory-specced packs, consisting of parking sensors front and rear, multiple USB outlets and a heated windscreen. At £31k it’s arguably the best value for money Gulia.

The Super starts at £31,575 for the petrol, the two diesels carry small premiums, with the more expensive 178bhp version priced at £33k. Justifying the price bump over the base trim is the larger 8.8-inch infotainment screen and 7-inch display integrated into the instrument cluster. The 17-inch alloy wheels also offer distinction from the base model which rides on smaller items.

The Speciale trim is style-centric with exterior touches lending a sportier aesthetic, with red-painted brake calipers, a double exhaust and sport bumpers, front and rear. Ignoring the heated seats and a heated steering wheel, there’s little separating the £36k Speciale and Super in terms of standard equipment.

The Veloce, an eCoty victor, crowns the standard range with the supersaloon Quadrifoglio model sitting far above it in performance terms. Bespoke alloys and a dual-exit exhaust set the Veloce apart visually and Ferrari-esque, aluminum gearshift paddles add a sporting flare to the interior.

The Giulia models offered largely reflect the variety of derivatives offered by the Audi A4, BMW 3-series, Mercedes-Benz C-class. There is a gap though between the Veloce and Giulia Quadrifoglio that the brands above have managed to fill with the S4, 340i and C43, respectively. Whereas the German trio are available in multiple bodystyles such as fastback or estate, the Giulia is saloon only. 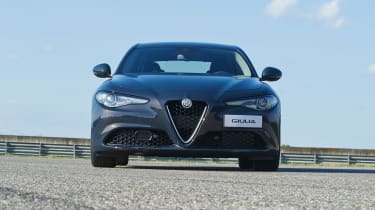