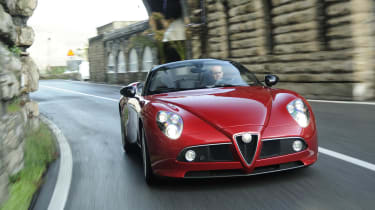 Alfa Romeo is bringing an all-new sports car to the 2011 Geneva motor show, according to reports online. Dubbed the 4C GTA, it would act as a halo car for the brand, similar to the 8C Competizione supercar, though at a much more affordable price. A Porsche Boxster-like £35,000 price tag is suggested. Like the Boxster, it will be rear-wheel drive and mid-engined, its structure a development of the hardcore KTM X-Bow. A carbonfibre and aluminium construction could give the 4C GTA a kerb weight as low as 850kg, and with the Alfa Romeo Giulietta Cloverleaf’s 1.8-litre turbocharged four-cylinder engine in the middle, providing around 250bhp, its performance would rival more powerful (but heavier) rivals from BMW, Nissan, Audi and Porsche. Alfa Romeo is said to have teamed up with fellow Italian company Dallara Automobili, who engineered the X-Bow. Dallara has reportedly developed a carbonfibre cockpit for the 4C GTA, featuring front and rear aluminium sub-frames to house the engine and a pushrod suspension setup. The Geneva show car is likely to be a concept that previews a production 4C GTA, which would be the first Alfa Romeo to wear the Gran Turismo Alleggerita badge since the hot 147 GTA hot hatchback and 156 GTA sports saloon of the early ‘00s. Expect the road-ready car to be on sale by late 2012, when it will ideally act as a catalyst to new Alfa Romeo sales – 2010 saw 112,000 new Alfas registered globally. The aim is to shift 500,000 annually by 2014, with a new 159-replacing Giulia sports saloon and an SUV among the next products the 4C GTA will be perched above. It could be sold in America, too. evo will be at the 2011 Geneva show in March – keep an eye on evo.co.uk for all the latest show news