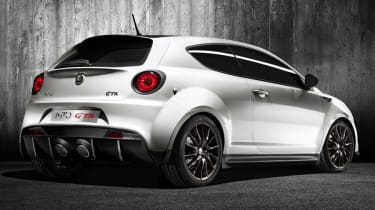 The latest incarnation of Alfa Romeo’s hot GTA models will be revealed at the Geneva motor show. This is the first shot of the Mito GTA, a scorching hot hatch that looks set to ruffle a few of the more established feathers in one of the most closely fought car genres.

It should be to be bit of a cracker – its 1.7-litre petrol engine gets direct injection and a healthily sized turbo, resulting in a Golf GTI and Astra VXR-besting 240bhp through the front wheels.

Alfa has piled its attention on an optimum power-to-weight ratio, too, with a plethora of weight-saving materials throughout the bodywork, cabin and chassis while the hotter Mito also boasts a lower centre of gravity.

Revised suspension front and rear plus a 20mm drop in ride height boosts the dynamics while there’s advanced damper control which features a Sky-Hook function, akin to models from fellow Fiat group member Maserati. Worries about too much front-driven power (which afflicted its Alfa 147 GTA ancestor) should be put to bed.

The Mito GTA is expected to undercut key rivals, including the Mini JCW, at around £20K. More details will be revealed live at the Geneva motor show, where evo.co.uk will be reporting live from the show floor from March 3. In the meantime enter our competition to win an Alfa Romeo Mito.