Like its Giulia cousin, the hot Alfa Romeo Stelvio Quadrifoglio SUV has also picked up some new colours and an Akrapovič exhaust 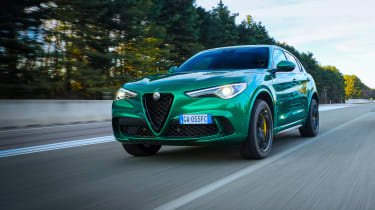 The Alfa Romeo Stelvio Quadrifoglio has joined the Giulia saloon in receiving a swathe of small updates in line with the standard 2020 model year Stelvio. Comprising a selection of new colour and trim options, a fresh interior interface and a new set of 21-inch wheels, the subtle changes don’t exactly transform the Stelvio’s underlying package.

Exterior design changes include the aforementioned 21-inch wheels – an inch bigger than previously available – and a new set of heritage-inspired exterior colours and clear rear lights. New interior trim finishes are also available, including a set of lurid green seat belts to match the optional white and green stitching you can specify on the interior.

The lower console has also been given a tidy up with new controls and a redesigned gear selector that replaces the nasty plastic unit that was previously standard. The infotainment system has also been given a thorough refresh, with new software and interfaces inside the 8.8-inch screen. One of these is a new performance data logger, which will display information such as real-time power and torque production, torque-split and yaw rates.

The powertrain is unchanged, combining the same 90-degree 2.9-litre twin-turbocharged V6 as found in the Giulia, but connected to an active all-wheel-drive system. Alfa’s Q4 all-wheel drive is very heavily rear-biased in the Quadrifoglio’s case, with power almost exclusively sent to the rear wheels and only sent forward depending on the selected drive mode and other factors such as power production and wheel slip. 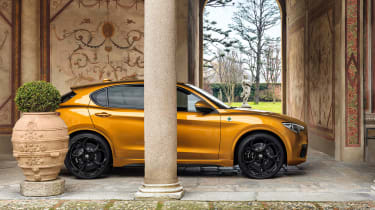 New for 2020 is the same bi-modal Akrapovič titanium exhaust option as used on the Giulia, visually identified by carbonfibre exhaust finishers. The new system doesn’t raise power beyond the standard 503bhp, nor has Alfa Romeo released specifics about a plausible weight saving compared to the Stelvio’s standard system.

Active safety has also been given an upgrade, now incorporating a new traffic jam assist feature alongside the usual blind-spot monitoring, active cruise control and emergency autonomous braking. The new Stelvio will go on sale later this summer, with local pricing and specifications finalised nearer the time, from when it will rival the BMW X3M, Mercedes-AMG GLC63S and Porsche Macan Turbo.

For more on the 2020 model year Giulia Quadrifoglio and its updates click here... 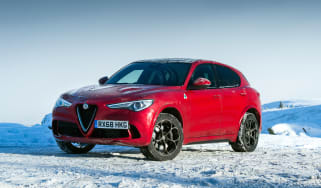