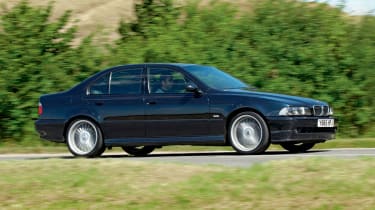 The obvious big BMW saloon that could have made our final three is the M5, yet while the E39 version falls within our price band, we’re not in an obvious mood and we’ve always been seduced by Alpina’s smooth and brawny alternative take on the E39 5‑series, the B10.

Based on the 540i, the B10 first arrived on these shores in 1997, when it commanded a list price of £64,000. For that you received a comprehensively re-engineered version of the V8 that had its capacity enlarged to 4.6 litres and power wound up from 286bhp to a hearty 340bhp at 5700rpm. Mated to this was an Alpina-developed Switchtronic five-speed gearbox with steering-wheel-mounted shift buttons, while other benefits included twin-tube gas dampers, anti-roll bars, vented discs all-round and those gorgeous 18in Alpina wheels.

This particular example is probably one of the best available – it’s virtually immaculate, wearing its 50,000 miles with barely a blemish. Inside, the brilliant BMW ergonomics have the added twist of Alpina’s subtle yet classy touch. The stitched leather steering wheel, the blue dials and the logo’d seats all heighten the level of exclusivity and quality beyond regular Bee-Ems.

It’s as good to drive as it is to look at, too, feeling as fresh now as it must have done back in 2001. There’s a satisfying weightiness to the controls and a solidity to the chassis. The V8 has a mellow timbre but responds instantly to any movement of your right foot, lunging towards the horizon when you keep it pinned. The claimed 0-60mph of 5.9sec isn’t in doubt and we’ve no reason to query the 175mph top speed boast either – it’s seriously rapid and the Switchtronic ’box does a neat job of keeping everything on the boil too.

But for all that it’s on twisting roads where the Alpina impresses most, being agile and adjustable. Gentle understeer is your starter for ten, and from here you can either trim your line or, with a little lift followed by a firm reapplication of the throttle, encourage the rear out to play in a manner expected more from a 3-series than a 5. The steering gives you all the information you could ever hope for from a car in this class too. For a big saloon this is a surprisingly effective drivers’ tool.

Checkpoints• Replacement Michelin tyres are possibly the most expensive running cost for the B10 – a pair of 235/40s for the front plus two 265/35s for the rear will set you back around £1000.

• The suspension requires a light overhaul at 80,000 miles, with new bearings and bushes costing around £500 fitted and new Alpina dampers coming in at around £260 a corner.

• The standard 540i engine has a very solid reliability record and the Alpina version is no different. Most Alpina owners are fastidious, but still check the condition of the oil, that it has been changed regularly and that all the paperwork is in order.

VerdictThe Jag is the first to drop out of the running. It's quick, of that there is no doubt, and you could cover great distances in it, wafting serenely to your destination, but it lacks teeth for those moments when you want to take it by the scruff of the neck and really drive. It also has the most potential financial pitfalls, although the plentiful supply of XJRs on the second-hand market should make finding a cared-for example relatively easy.

The E55 is more our bag and we can’t imagine that if you bought one you’d ever think you’d made the wrong choice. It’s a great all-rounder and in its day it must have been nothing short of amazing.

Today, though, we have found something that sparks our fire even more. The Alpina was the most expensive car of our trio to buy new, and even today it looks and feels the most special. It’s also reliable and, most importantly of all, the most rewarding from behind the wheel. Equally importantly, with the market so weak at moment we've spotted a couple of bargains in the classifieds. So all we have to do now is find a good one, buy it and get it converted to run on LPG.