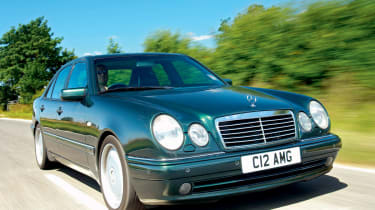 ‘The Mercedes DNA runs right through it,’ says editorial director Harry Metcalfe after a short drive in the E55 AMG. ‘It feels like you could just jump in, drive to the other side of Europe in one go and feel as relaxed as when you started out.’ Sounds like the big Merc has found an instant ally, and I’m not surprised – back in its day it was the quintessence of high-powered executive motoring, with a fine chassis and all the hardware to fully exploit it.

Packed under the bonnet is an aggressive-sounding hand-built 5.4-litre supercharged V8 that laid 354bhp onto the tarmac via a fast-acting five-speed auto gearbox. In a world of RS6s that output may not sound like a lot, but back in 1998 it was extraordinary and even today you shouldn’t be fooled – this big old girl is still properly quick. Despite its size and spec, at 1642kg it doesn’t weigh as much as the other cars here and it uses that missing mass to devastating effect – plant your foot and the wagging finger of the ASR system cuts in even if you’re going straight and it’s dry.

Funny thing is, though, it doesn’t feel like an AMG. We’ve grown used to Mercs wearing those letters being more edgy than this. Compared with the raw, hard-hitting, current AMG models, it’s more relaxed, using the huge swell of torque to whisk you across continents. It’s also rather more affordable than the new ones – a just-run-in 100,000-miler in good order can be yours for £8K or less, and there are plenty to choose from.

The interior looks and feels as though it was designed to last forever – the switchgear, dash and plastics have a solid feel and should never squeak or rattle. The seats may be a touch firm and the leather is hard and often shiny, leaving you sliding around, which is a shame because the E55 can corner in a way that defies both its age and size. The Merc is an easy car to like and one that you could live with for many years. It’s also the type of car that will always give you the warm glow that comes from finding something so accomplished at such a low price.

Checkpoints• The E55’s Achilles heel is its susceptibility to rust. Doors and roofs are the most common and easiest places to find it, but check wheelarches and sills too.

• The engine is robust but it needs to have been fully maintained. Blocked water-pipes can cause overheating; if the service records show these have been replaced speak to the garage that carried out the work to see if the engine had been running hot.

• Suspension components last longer than those of the other two cars here (probably because it’s lighter), so you may find the dampers will reach 100,000 miles.