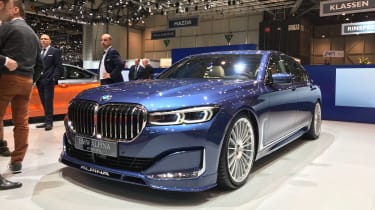 Alpina has revealed its new B7 saloon in Geneva, the hot 7-series derivative designed to rival the in-house BMW M760Li and Mercedes-AMG S63. Featuring a heavily boosted twin-turbo V8 under the bonnet, the B7 differs from its Bavarian stablemate by doing without those four extra cylinders, but fights back with more power and slightly less weight to have to deal with.

As with the standard BMW 7-series, the new B7 has adopted the new... erm, large grille, but as Alpinas are classically based on non-M Sport base cars, it does at least stick with the standard 7’s more understated styling. Underneath the grille is the classic Alpina motif though, while other classic Alpina elements such as the needle-spoke wheels and quad oval exhaust outlets complete the picture.

The B7’s V8 starts its life in the new 750i, but builds on that car’s standard 522bhp, producing a peak output of 599bhp. Torque is also up by 37lb ft to 590lb ft, spread liberally between 2000rpm and 5000rpm. These considerable figures result in some exceptional performance numbers, reaching 62mph in just 3.6sec, four tenths faster than the standard 750i. 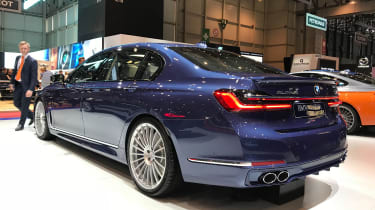 Power is transmitted via a ZF eight-speed automatic gearbox that’s equipped with bespoke Alpina software and drive goes to all four wheels via BMW’s xDrive all-wheel drive set up that’s biased towards the rear wheels. A Drexler 40 per cent locking limited-slip differential is offered on the extensive options list.

Keeping the 7-series’ mass in check, the B7 features a twin-axle air-suspension system, active integral steering – BMW’s rear-axle steering system – and an active anti-roll mitigation system, all of which are seen on the standard car in various guises, too. Alpina has also engineered in its own Alpina Sport+ mode into the selectable drive modes, combining a bespoke calibration for those aforementioned chassis elements and a 15mm drop in overall suspension ride height.

Sales in the UK are likely to be in the single digits and Alpina expects customers will be those who desire the potential personalisation offered by firms such as Rolls Royce and Bentley but in a less intimidating and ostentatious package. Prices have yet to be finalised but will be in the £120,000 to £130,000 range. Despite the distinguished new look, the B7 remains one of the coolest Alpina models for those who like to do luxury motoring a little differently.

While B7 was the star of the Alpina stand it also brought along examples of its 5-series-based B5 Touring – with a 200mph top speed it’s the world’s fastest estate car – as well as the limited production B4 S Edition 99, the most extreme version of its BMW 4-series-based machinery.

Last up for Alpina was the XD4, its take on diesel-powered X4. This model won’t be coming to the UK market but the mechanically similar XD3 with 328bhp and 516lb ft of torque will be offered to UK buyers.