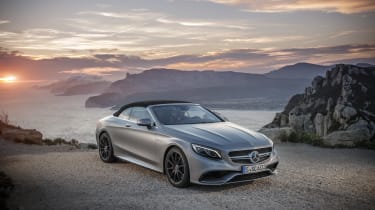 This is Mercedes-AMG’s £135,675 S63 Cabriolet, which, as the name suggests, is the open-top variant of the company’s four-seater coupe. This means there’s a 577bhp 5.5-litre twin-turbocharged V8, Mercedes’ MCT 7-speed sports transmission, the choice of rear- or four-wheel drive (right-hand-drive markets will get rear-wheel drive only because the steering rack won’t wrap around the front driveshafts) and the world’s largest opening fabric roof.

Despite the 115kg weight penalty over the S63 coupe, the new Cabriolet, all 2110kg of it, completes the 0-62mph sprint in an identical 4.2sec (the 4Matic four-wheel-drive version is three-tenths quicker at 3.9sec, two-tenths quicker than an S65 coupe) and is artificially limited to 155mph.

As with the coupe, the S63 Cabriolet is overflowing with technology. The sports exhaust system features logic-controlled exhaust flaps in both rear silencers, which remain closed when the gearbox is set to Comfort mode and only open if you select Sport or switch the gearbox to its manual mode.

Unlike the S500, the S63 is fitted with Mercedes-AMG’s MCT 7-speed Sports transmission, with the three aforementioned modes available. 4Matic S63 Cabriolets also have 33 per cent of the hand-built engine’s torque sent to the front axle. 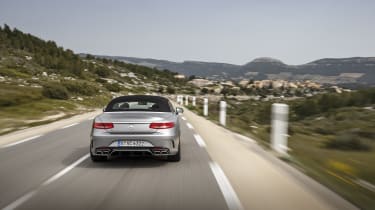 Air suspension is standard on the S63 (both the rear-drive car and 4Matic) and it features Mercedes’ ADS Plus adaptive damping, which can be set to Comfort or Sport and is tuned specifically to this AMG model. The ride can also be increased by 30mm on poor surfaces and will automatically lower again at 70mph or if Sport mode is selected.

The S63 Cabriolet comes with a composite brake system as standard, but a ceramic system can be ordered at extra cost and saves a further 20 per cent in weight over the standard brake set-up.

Like an S63 but without a roof. Which is meant as a compliment to the S-class engineers who have managed to retain pretty much all of the serenity, calmness, comfort and refinement of the coupe despite removing the roof.

Roof up and you’re hard pressed to tell you are in a cabriolet. The three-layer fabric roof wins the battle against wind noise when its closed, and when you’ve lowered it Mercedes’ automatic wind protection system sees a deflector rise out of the windscreen header rail to deflect the airflow over the front-seat passengers with impressive effect, although rear-seat passengers aren’t as cocooned as they are in, say a Bentley Continental GT Convertible. 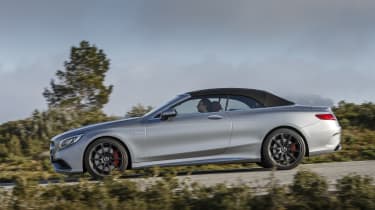 In terms of dynamics it’s hard to say if the S63 Cabriolet’s are any better or worse than the coupes because there were only 4Matic Cabriolets available to drive on the launch. However, as with the rear-wheel-drive coupe, this 4Matic Cabriolet is an incredibly surefooted beast, has great composure at big speeds and can be remarkably agile on tighter roads that you think would unpick the big Benz’s chassis. Rather than be a cog in the big machine, you can become an integral part of the S63’s progress.

Bentley’s £165,600 Continental GT Convertible is the obvious candidate. Its 582bhp turbocharged W12 is more than a match for the Mercedes’ AMG engine and, unlike the German, is only available with four-wheel drive no matter which side the steering wheel is on.

Porsche’s new £154,614 911 Turbo S Cabriolet just about offers seating for four like the S63, but the pay-off for squeezing someone into those rear jump seats is that they too can experience the Porsche’s phenomenal performance.

For badge kudos Ferrari’s £155,460 California T will probably win it for most, and while it’s not our favourite Ferrari, in this category it delivers the best mix of performance, quality and wind-in-the-hair thrills for four.

The S-class Cabriolet range also includes the even more bonkers S65 (621bhp, 737lb ft of torque) and the pick of the range, the S500. The latter makes do with a 4.6-litre, 449bhp twin-turbocharged V8, is mated to a nine-speed auto and delivers 90 per cent of the S63’s performance with 110 per cent of its civility.