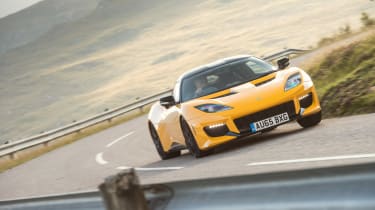 'One of the reasons I came to Aston Martin was to broaden my experience. Beyond that, at Aston Martin you’ve got a front-engined sports car all the way up to a luxury GT car. My job is basically being able to tune and develop the car for the market it’s going to go into.

‘I was always known at Lotus for adding polish to a car, and what I want to do at Aston is to make sure that the cars have a polished feel to them as well. The spectrum I’m looking at now is much broader than it’s ever been, but the key thing I want to make sure of is that a lot of the lessons I learned at Lotus are applied here so the cars drive very well.

‘I’m excited about a broader spectrum, but you have to remember that when I was at Lotus I also worked for the engineering consultancy division, so there were many cars I worked on that nobody ever knew about. I can’t tell you what they are, but while it may have looked like all I did was mid-engined cars, I’ve actually done multiple layouts, from front-engined and rear-wheel drive all the way through to four-wheel-drive SUVs.

‘What’s important is that, if you’re working on a brand with many different cars, you bring balance to the attributes to make sure that the car drives appropriately for the marketplace it’s headed for.

‘I’m one person, but there’s a team underneath me, so I have a vision in my head and I know what I want the cars to feel like. What I need to do is communicate that to my team and make sure they’re a strong enough unit to deliver that. 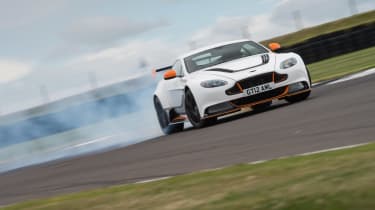 ‘Some people have this vision that I just drive cars all day long, but that’s definitely not the case. Sure, I’m heavily into driving and testing of some products, so I’ll make sure I go to the Nürburgring or go testing in Rome or the Bridgestone facility we use. I’ll also make sure I go to Sweden at the end of the year.

‘Ultimately I’ll make sure that I get to drive. There’s no point sitting behind a desk; you need to sit there and demonstrate how you want the car to feel.

‘The biggest point of my career so far was doing the Evora, and again this is one of the reasons I’ve come to Aston Martin. I grew up doing the Elise, but the Evora was kind of my baby for dynamics. I did the steering, ride and the lot in terms of development. There was obviously an engineering team behind me, but to this point, that was my proudest moment – when the journalists got out of that car and said, “That thing is incredible. How did you do that?”

‘What I’ll do is bring that philosophy – of how I developed that car – to Aston Martin. There are very few places that can offer up an opportunity to start with a clean sheet of paper and develop a completely new car. You’ll see the first “Matt Becker” Aston Martin in 2016, but the new GT12 I’ve had some involvement in as well.

‘As for the arrangement between Aston Martin and Mercedes, it’s to utilise some of their components. There are many different parts we may use on a car, but I’m not going to confirm them now. What we will do is select the appropriate components, which we then won’t need to spend tons of money on.

‘With turbocharging we’re in a good place, we know what we’re doing, we know the sound quality we want and we have a very strong team of engineers that can analyse what we have. We can simulate what the cars are going to sound like, we can analyse that sound and then actually put it together and fit it to the car.

‘I think the noise is there already, but it’s going to be about continuing it with the trend in [forced induction] engines and the way they’re going, but I’m confident that we’re in a good place.

‘With all the tools we’ve got, on future Aston models I want to broaden the spectrum and dynamic envelope. My intention is to make sure we can turn the car up and down, i.e. with the different modes, to give us the difference in character that we’re looking for.

‘In the end, I’m looking to take on more responsibility, maybe be a technical director in the next five to ten years. Because I’m going into a larger organisation than I’ve been used to, I have to learn some of the processes and systems that the company has. Once I understand all those and perhaps take on more responsibility and a bigger team, then I want to grow my position within the company.

‘Taking on a new job like this and moving brands was a big thing – for the first six months I’ve been continually driving the different cars, understanding them and organising the team the way I want it.

‘Beyond ten years’ time, where do I want to be? I don’t know. I’ve never really thought that far ahead. At the moment there’s so much work ahead of us in the near future. I just want to be part of the team that develops some of the best cars in the world.’

Aston Martin is about to go through a hugely significant period for the company. Its association with Mercedes will mean plenty of expensive boxes are ticked in terms of technology and engine development, leaving Matt Becker and his team free to create cars with superb handling characteristics.

Don’t underestimate Becker’s involvement with Lotus’s engineering consultancy, either. He will have worked on a wide range of products above and beyond cars such as the mid-engined Elise. This should mean he’s able to execute a much more clearly defined set of driving characteristics for each model in Aston’s future product range.

As for the Evora, it might not have been a huge success for Lotus, but if Becker’s signature steering feel can be transferred to some of the electronic systems likely to be fitted to future Aston Martins, it will make for some very exciting cars indeed. Hunter Skipworth