Latest collaboration features nod to One-77 and Vulcan 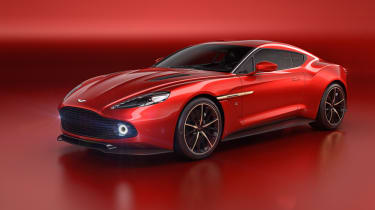 The Aston Martin Vanquish Zagato Concept is set for its public unveiling tomorrow at the Villa d'Este concours d'elegance in Italy. Prior to its launch, Aston has shared a set of images of the car, which is the latest collaboration of the British manufacturer with the iconic Italian design house.

The Vanquish Zagato features lights that echo those on the track-only Vulcan, while the front end of the car and wingmirrors has hints of One-77 about it. Developed and engineered in Gaydon, it's the latest of five cars produced in partnership with Zagato, the first of which, the DB4 GT Zagato, was built in 1960.

Zagato's trademark roof, complete with its 'double bubble' design returns. At the rear is a retractable spoiler, while the bladed LED lights from the Vulcan have also been utilised, although in a slightly different shape. The car features quad exhausts and a carbon splitter.

Dynamically, the Zagato concept is different. It uses Aston's own 5.9-litre V12 engine, but with 591bhp rather than the standard 568bhp. The adaptive dampers have also been returned to be stiffer and sharper.

Inside the Vanquish Zagato features a combination of leather, carbonfibre and anodised bronze as well as quilted pattern stitching on the seats.

Aston Martin's Zagato concepts traditionally transform into road cars. Back in 2011 we drove Aston's V12 Zagato, praising it for its noise, balance and engagement. Just 101 were built, making it almost as exclusive as a One-77. If the Vanquish concept does become a reality, expect it to be just as exclusive and likely just as exciting.