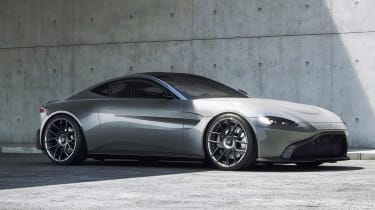 With the standard car producing a measly 503bhp and 505lb ft of torque, the increases are significant, coming in at 167bhp and nearly 100lb ft respectively. The uplifts have resulted in marginally better performance figures, with the tuned car taking a claimed 3.3sec to sprint from standstill to 62mph and going on to a top speed of over 205mph – the standard car does 0-62mph in 3.6sec and tops out at 195mph.

The increases in power and torque come from the use of larger turbochargers, along with freer-flowing sports catalytic converters, a new valve-controlled exhaust system and, of course, an ECU tune to go with the new hardware. 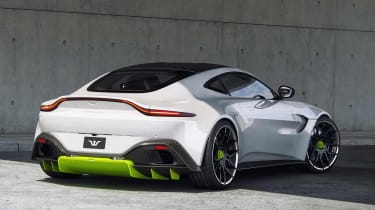 Other modifications include new multi-part forged wheels available in 21 and 22-inch sizes, the latter fitted with 265/30/22 tyres at the front and 315/25/22 at the rear. A reduction in ride height along with larger brakes can also be seen in the images, although further details on these haven’t been revealed.

Despite power and torque figures that fall short of the 715bhp and 664lb ft offered by the £225,000 DBS Superleggera’s 5.2-litre turbocharged V12, the performance of this modified Vantage is surprisingly close: its 0-62mph time is identical to the bigger Aston’s, and its top speed falls just 6mph short. Wheelsandmore has not released any pricing, but given its luxury and supercar focus, we’d suspect that all the upgrades, whether aesthetic or mechanical, won’t be cheap.