Slower than the E-Type and and twice the price, but Aston's DB5 had the 'Goldfinger-factor', and sales were assured 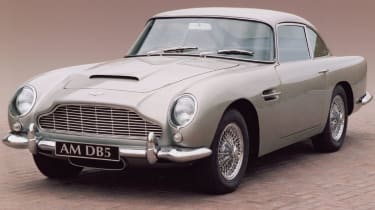 When the DB5 was unveiled at the Earls Court motor show in October 1963, it’s unlikely that anyone at Aston Martin anticipated just how successful it would be. Why would they? The new model was little more than an update of its DB4 predecessor – a car that had already been around for five years – and it looked virtually identical.

That was probably no bad thing, though. When the DB4 was being developed in the late ’50s, Aston general manager John Wyer had insisted that its styling should come from an Italian coachbuilder, and it was a decision that paid off – the body created by Carrozzeria Touring of Milan was so beautiful that it was no doubt responsible for a large number of DB4 sales all by itself.

Although the bodies for the DB4 were built at Aston’s Newport Pagnell works in Buckinghamshire, they were constructed, under licence, using Touring’s patented Superleggera (or ‘super light’) technique of placing aluminium panels over a latticework of steel tubes that defined the shape of the car. Beneath this was a chassis designed by Harold Beach, with double-wishbone suspension at the front, a live axle rear, rack-and-pinion steering and disc brakes all round.

The DB4 would be subject to numerous revisions during its five years in production, and it would be the final Series 5 evolution, complete with its extended wheelbase and higher roofline for more interior space, that would form the basis for the DB5. Indeed the first DB5 prototype, finished in Dubonnet Red and bearing the chassis number DP/216/1, was built using a DB4 as its starting point. The most significant change for the new model would be the introduction of a 3995cc straight six – already seen in the 1961 Lagonda Rapide and in fact the DB4 unit with a 4mm bore increase. Complete with three SU carburettors it offered an additional 42bhp and was mated to a five-speed ZF gearbox (optional at first, although soon made standard) and a more robust Borg & Beck clutch.

Inside, the new car was more luxurious than any Aston before. Electric windows came as standard and a Normalair air-conditioning system was available as a £320 option. However, the DB5’s many upgrades meant it weighed over 100kg more than the car it replaced. The bigger engine kept things on track, reducing the 0-60mph time to around 8sec, yet both this and the 142mph top speed failed to match the figures claimed for Jaguar’s E-type, which cost half the price of the £4175 Aston.

What the DB5 would soon have on its side, though, was one of the most memorable examples of product placement in history – a starring role in the third James Bond movie, 1964’s Goldfinger. Ironically, Sean Connery’s Bond could easily have ended up in an E-type – Ken Adam, Goldfinger’s production designer, drove one himself and thought it would be perfect for 007, but when the film’s producers asked Jaguar if they would supply a car, they were turned down.

Amazing as it may sound today, Aston owner David Brown was also reluctant when he was first approached. He eventually relented, though, and dispatched the prototype DB5, still wearing its original BMT 216A number plate, to Pinewood Studios to be equipped with a full complement of Secret Service gadgets before it was treated to a Silver Birch respray.

Aston had considered the DB4 a success, but the DB5 sold twice as fast, with 1021 being built during its brief two-year production run. The DB5 may have been a better car, but it didn’t hurt that, when Goldfinger was released in September 1964, it also became the most famous car in the world.