Q by Aston Martin has built a mad V8-powered Cygnet. Does it need any further introduction? 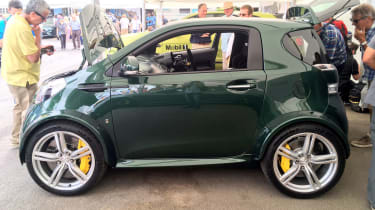 In what might be the most bizarre example of a factory customer commission yet, Q by Aston Martin has revealed details of a weird and wonderful V8-powered Cygnet. Yes, that’s right, the department usually responsible for elegantly modified, carbonfibre-bodied supercars has diversified into hot hatches. Kind of.

Despite the Cygnet’s tiny dimensions, the 4.7-litre naturally aspirated V8 engine, borrowed from the previous-generation Vantage S, has somehow been shoehorned between the nose and dashboard in a space usually fitted with little more than a 1-litre three-cylinder. Connected to the engine is the same seven-speed automated manual gearbox, powering the rear wheels by what Aston Martin calls a ‘very short torque tube’.

> Click here for our review of the latest Aston Martin Vantage

Power is rated at an identical 430bhp as the V8 Vantage S, but thanks to the compact body, the kerb weight is just 1375kg, giving the V8 Cygnet a 313bhp/tonne power-to-weight ratio. Aston has even performance-figured it, reaching 60mph in just 4.2sec and a (no doubt frightening) top speed of 170mph – over 60mph more than the standard Cygnet.

Hiding beneath new carbon-composite wheelarches are the same 19-inch alloy wheels from the Vantage, as are the six-piston front brakes, subframes and basic suspension layouts. The compact exhaust system is bespoke to the V8 Cygnet, producing what is likely to be a very un-city car-like engine noise.

Aston Martin has done away with much of the standard Cygnet’s interior though, fitting a dash derived from the Vantage, with an FIA type-approval rollcage and seating set up. This means that in certain circumstances, the Cygnet’s owner could even enter it in FIA-approved motorsport, if they so desired.

Developed in-house by Aston Martin engineers, the V8 Cygnet is a showcase of the levels that Q by Aston Martin can go to if a customer so desires. Starting life as a basic Cygnet, itself a rebodied version of Toyota’s clever iQ city car that was on sale between 2008 and 2015, the team at Q started by fabricating a new bulkhead and floor in order to fit an engine with nearly five times more displacement than the original.

Itself already a marvel of compact car packaging design, the V8 Cygnet is a rather different type of clever engineering, but inarguably more entertaining. If your headed to the Goodwood Festival of Speed this weekend, you’ll see it scampering its way up the hill, too, and we gather it might well be one of the most attention-grabbing cars of the weekend.