The DB11’s range kicks off with a familiar engine, but from an unfamiliar source. Like the Vantage and DBX, the ‘base’ DB11’s 4-litre twin-turbo V8 is the same M178 AMG unit that features in a big cross section of AMG models. While it may sound a tad less exotic than the V12, if you’re going to share an engine with someone, it might as well be the best, and AMG’s V8 is close to it.

Power is rated at 503bhp, but given that variants of this same motor can top that figure by upwards of 100bhp, it feels under-stressed and good for its claimed performance figures. Torque is also a core attribute of AMG’s V8, peaking at 498lb ft over a massive rev plateau from just 2000rpm. 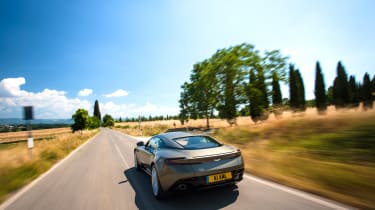 The V12 found in the AMR is all Aston Martin by comparison. It’s a bespoke twin-turbo, all-alloy, quad-cam, 48-valve, 5.2-litre V12 found only in this and the flagship DBS Superleggera. In AMR form, it outputs 630bhp and 516lb ft which represent a big on-paper jump over the V8 models.

In order to keep in compliance with increasingly stringent emissions regulations, the V12 has cylinder deactivation (Intelligent Bank Activation in Aston speak) and stop-start. Drive on all models is sent to the rear wheels via ZF’s ubiquitous but very good eight-speed automatic gearbox. There is also a mechanical limited-slip diff, and active torque vectoring using the brakes, which are steel as standard.