Refreshingly free of performance car rhetoric, the DB11 resolutely sticks to the GT brief. The DB11 is hugely capable; less thrilling than its sportier siblings, yet able to happily transport you and a friend to the Italian lakes without breaking sweat.

The DB11 is most definitely a GT car. There’s plenty of length in the suspension travel which gives it a wonderfully relaxed feeling over bigger bumps and makes it a very nice place to do a long journey (just as well, given that we covered about 1500 miles in one while delivering it to the launch location in Tuscany). Despite this focus, the DB11 still has that underlying quality of engineering and setup defined by Matt Becker-era Astons.

The steering is surprisingly quick and the balance of the chassis is beautiful. Throw it at a fast corner and you get this wonderful feeling of the car leaning into its outside rear wheel and encouraging you to get on the throttle early to drive hard through a corner. It really does inspire confidence and even over the limit you seem to have plenty of time, with the quick steering easily stabilising the angle.

Push the front end hard on a slightly tighter road and you will hear the front tyres chirrup as they reach their limit, but the long nose never washes out. There isn’t a great deal of feel through the steering, but it is accurate and there’s a definite sense of solidity and connection that allows you to push the big car surprisingly hard.

Only on a bumpy British B-road does the DB11 feel less happy being hustled because although the fundamental balance remains, the rapid fire nature of the bumps means the damping doesn’t always have time to really control the long travel between hits. Because it’s not ruthlessly tied down it can also feel a little floaty as it moves through its suspension on turn-in. 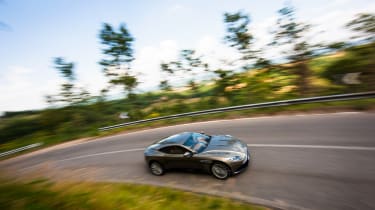 The V12 engine is mighty and really gets into its stride around 4000rpm. In fact the mid-range is where you have to live to get the best from the V12. It can often feel tempting to downshift an extra gear on the way into a corner, but you’re better off leaning on the readily available mid-range torque and leaving yourself more headroom with the revs as the V12 doesn’t have an expansive top end to reach into like the naturally aspirated cars of old. Move up to the Sport or Sport Plus settings and the exhaust note comes alive too. The double-glazing muffles the sound a bit inside the car (as it’s meant to) but the soundtrack is most definitely distinctly Aston, despite the addition of the turbochargers.

The V8 model by comparison trades on a finer balance, with less mass in front of the driver to manage, it turns in with a little more enthusiasm and verve, even if the grip levels are mostly even.

In any form, the DB11 is a rather lovely thing. On our test it proved a great car for eating the miles across France, Belgium, Germany, Switzerland and Italy and was then very enjoyable on the more flowing roads of Tuscany when we got there. Tighter, bumpier roads are not really its thing, but that’s fine. Aston is determined that each of its new generation of cars should be distinct both in terms of looks and dynamics and the DB11 fulfils the GT role very well indeed. 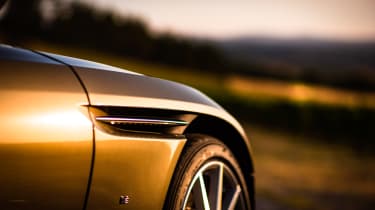