Aston Martin finds a gap between the DB9 and DBS and fills it with the new Virage. Details and pictures here 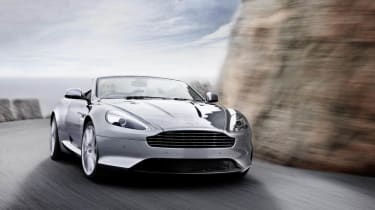 The Aston Martin Virage is back, with this new car set for a reveal at the 2011 Geneva motor show. The badge was last seen on an Aston in 1996. The Virage (French for curve if you were wondering), will sit between the DB9 and DBS in the Aston Martin line-up and is designed to be an all-rounder, blending the high performance of the latter with some of the refinement of the former. It will be available both as a fixed head coupe and in convertible Volante format. Sharing the bonded aluminium VH platform with the DB9 and DBS, the new Virage stands to benefit from the chassis’s seven years of development, and as such Aston has high hopes for the Virage’s ride and body control.  CEO Dr Ulrich Bez calls the Virage ‘the most refined Aston Martin to date, requiring less effort to extract maximum performance.’ The familiar all-alloy 5.9-litre V12 sits up-front, producing 490bhp and 420lb ft. This rather neatly confirms the Virage’s position between the 470bhp DB9 and 510bhp DBS. Like its stablemates, power is sent to the rear wheels via the six-speed Touchtronic II automatic transmission from the Aston Martin Rapide. Expect 0-62 mph in 4.6sec and a top speed of 186 mph. The Virage boasts a newly developed Adaptive Damping System (ADS), with five different stiffness settings selectable in ‘normal’ mode, and five additional firmer settings in ‘sport’ mode. Hitting the sport button also triggers sharper throttle response and quicker gear changes, with gears held for longer without automatically shifting up at the rev limiter. Carbon Ceramic Matrix (CCM) brakes are equipped as standard, resisting fade as well as saving weight. The reduction in unsprung mass made possible by the lighter brake material should also see benefits in ride and handling. The Virage boasts a perfect 50:50 front/rear weight distribution. The Virage’s styling is well executed mix of Aston Martin elements, with front end grille treatment reminiscent of the One-77 and single bi-xenon headlamps following the contours of the front wings as per the Rapide.  One particularly neat touch is the integration of the side repeaters into the trademark Aston side strake via LED lights. Pronounced, blade-shaped sills are designed to reflect light at the Virage’s base, forming a broad highlight which carries the line of the new front bumper design through the car. Inside the car, no less than seven hides of hand-stitched leather await the occupants, Aston Martin stating that 70 man-hours will be spent crafting the interior alone. 200 hours in total will be spent on each car at the plant in Gaydon, the Virage being the 12th major production car to be built there in the last eight years. The Virage and Virage Volante are on sale right now at all Aston Martin dealers.  Pricing is to be confirmed at the Geneva show, where it will be displayed alongside the new V8 Vantage S and Cygnet. Expect its price to sit pretty neatly between the £125K DB9 and £175K DBS, too. Aston Martin DBS v Bentley and Ferrari Aston Martin Rapide v all its key rivals All of evo’s 2011 Geneva motor show news