Aston Martin pulls the covers off its all-new Vanquish, which replaces the DBS with 565bhp and sharper looks 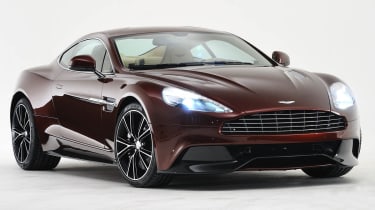 Aston Martin has announced the return of the Vanquish. It’s a lighter, faster, more powerful and more efficient replacement for the DBS.   The Vanquish has a sharper, more muscular new look, heavily influenced by the One-77 supercar. The all-carbonfibre body has eye-catching features such as the extended side-strakes, sharply structured front splitter and rear wing, and new light clusters.  Under the bonnet, improvements to the 5.9-litre V12 engine have centred on its breathing, with enlarged throttle bodies, a reshaped inlet manifold, dual variable valve timing, fully machined combustion chambers, valved airboxes and a lighter, uprated fuel pump all contributing to boosted power and torque figures of 565bhp at 6750rpm and 457lb ft at 5500rpm, up from the DBS’s 510bhp and 420lb ft.  While those numbers pale against the Ferrari F12 Berlinetta’s breathtaking stats, Aston is side-stepping a head-to-head fight it can’t win by remaining true to its GT roots, with a torque-rich mid-range for maximum in-gear performance. Purists will be disappointed there will be no manual transmission option for the new Vanquish. Instead a six-speed paddle-operated automatic is being developed, with a choice of shift maps to suit your mood and driving conditions.  There is a choice of suspension settings and a three-stage (normal, sport and track) DSC system, which also alters the weight and feel of the power steering. The ratio of the steering has also been reduced to increase the sense of agility and response.  The brakes are latest-gen carbon-ceramic discs, which offer greater outright stopping power as well as reduced ‘brushing’ noise when the brakes are applied. While no official weight has been announced, the Vanquish is expected to be 70-80kg lighter than a DBS - so around 1620kg - with the weight trimmed from a number of areas, including the engine and exhaust system. The increased power and reduced weight gives the Vanquish a power to weight ratio of 354bhp/ton compared to the DBS’s 306bhp/ton.  The all-new interior is more spacious and can be configured as a 2+2, or a 2+0 for extra luggage space. A phone, Garmin satnav and B&O hi-fi system are controlled through an integrated system operated via one LCD screen, while the lavish upholstery includes quilted leather.  The new Vanquish is likely to cost in the region of £190,000, around £15,000 more than the DBS, although much less than the estimated £250,000+ price tag for the Ferrari F12. Deliveries will commence in early 2013 – Aston Martin’s centenary year.

Read (and see) more on the new Aston Martin Vanquish in evo 172 - on sale now!