Ferrari replaces the 599 GTB with the new F12 Berlinetta supercar, its most powerful road car ever. Full details and official pictures here 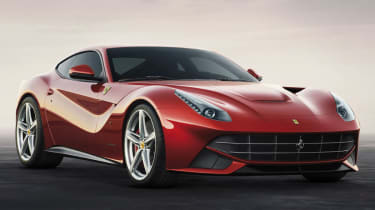 Meet the Ferrari F12 Berlinetta. It’s an all-new V12-engined supercar, which replaces the 599 GTB and surpasses its performance with some authority.  A brand new 6.3-litre 12-cylinder engine boasts 730bhp and 509lb ft of torque; that makes it comfortably Ferrari’s most potent road car ever, over 60bhp healthier than both 599 GTO and Enzo. It also comfortably trumps the 690bhp Lamborghini Aventador while matching its torque figure. Peak power arrives at 8500rpm – 200rpm short of the F12’s no doubt sonorously soundtracked rev limit. With a 1525kg dry weight (55kg lighter than the 599 GTB), its similar to the Aventador, despite not matching its Italian foe’s carbonfibre construction. The F12 is made from aluminium, and it’s smaller than the 599 - 47mm shorter, 20mm narrower and 63mm lower, to be precise.

Far from beating its supercar rivals in the power war, the F12 possesses some very clever (and clearly motorsport inspired) aerodynamics. The dramatic sculpture lines you can see on the car’s side profile serve a real purpose, directing air from front vents, generating significant downforce, while there’s Active Brake Cooling, which directs air to the brake cooling ducts at high speed. There’s also a blown diffuser at the rear of the car. All together, there’s 123kg of downforce at 124mph – up 76 per cent on the 599’s figure – and a big reduction in drag, down to 0.299Cd. Whether all this makes the F12 appealing to the eye or not is personal opinion…

There’s Ferrari’s usual plethora of technology under the skin, too, with carbon-ceramic brakes, new magnetorheological suspension and a wealth of tried-and-tested control systems, including E-Diff, ESP and F1-Trac.  Ferrari’s seven-speed twin-clutch gearbox is standard-fit, and with closer gear ratios than in the four-seat FF, it helps hustle the F12 to 62mph in 3.1sec, hitting 124mph in a mere 8.5sec (a second quicker than an Enzo) onto a 211mph top speed. It’s also the quickest road car ever around Ferrari’s Fiorano test track, with a 1min23sec lap. And being a replacement for the 599, rather than a reborn Enzo, this is no road-going racecar – there’s plenty of luggage capacity and a plush leather and carbonfibre-clad interior. The Ferrari F12 Berlinetta gets its full reveal at the 2012 Geneva motor show, which takes place next week, when we’ll have further details and plenty of pictures. To read more about the F12 and Ferrari’s future, click here