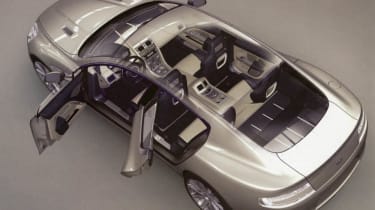 The first picture of the Aston Martin Rapide’s interior has made it onto the internet.

It’s a scan from a brochure for the sports saloon, and is an overhead cutaway shot that reveals four individual bucket seats, separated by a stocky centre console that runs the length of the car. It provides a number of controls for the rear passengers, presumably for the rear air conditioning. TV screens in the back of the front headrests look set to provide entertainment for those in the back, too.

There’s also a good look at the Rapide’s trick bootspace, which is made flexible via a split bulkhead and boasts the option to fold seats flat, making it much more practical than the sleek DB9-esque looks probably suggest. Like the Porsche Panamera, it’s a hatchback rather than a four-door saloon.

The Rapide will be powered by the DB9’s 5.9-litre V12 engine, with 470bhp on tap. It’s set to cost around £140,000, raising it above its closest rivals from Porsche and Maserati. Aston Martin’s supersaloon gets its full reveal at the Frankfurt motor show in September, an event evo.co.uk will have full show floor reports from.