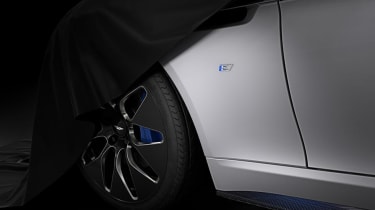 Aston Martin has confirmed the powertrain specification of its first electric production car, the Rapide E, ahead of its 2019 launch. Working with Williams Advanced Engineering (WAE) the British sports car firm, which recently announced it is to become a public company, will build 155 examples of its 602bhp Rapide E electric GT-supersaloon, costing an estimated £250,000 each.

Replacing the 552bhp 6.0-litre, V12 found in the engine bay of the Rapide S will be an 800-volt battery architecture with a 65khw capacity producing the equivalent of 602bhp, 15bhp more than the recently launched Rapide AMR. With 701lb ft of torque at its disposal the battery powered Rapide will be just that with a top speed of 155mph, a 0-60mph time below 4secs and a 50-70mph time of just 1.5secs.

> Read all our Aston Martin news and reviews here

All very impressive, all most certainly very Aston Martin in terms of performance but what of the elephant in the room: range? To that end the Rapide E, says Aston, will have a target range of 200 miles under the recently introduced Worldwide Harmonised Light Vehicle Test Procedure (WLTP to you and I). The aforementioned performance will also, claims Aston, be available regardless of the level of battery charge with both the engineering teams at Gaydon and Williams working closely on battery cooling to guarantee a minimum level of performance no matter the temperatures. 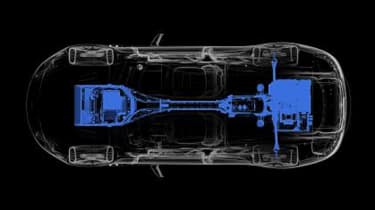 When it comes to charging Aston Martin predicts an hour on a 400V 50kW charger will result in 185 miles of electric range, with 310 miles of range achievable after an hour hooked up to an 800V outlet of 100kW or higher. The average home charger is around 7kW.

Two electric motors will drive a rear wheel each via an Xtract developed transmission. The limited-slip diff is retained to distribute the torque without fear of undoing all the zero emission goodness by smoking the Rapide E’s bespoke low rolling resistance Pirelli tyres to oblivion. While the four-door coupe’s architecture remains true to the V12 powered derivatives, the spring and damper settings will be changed to suit the Rapide E’s weight distribution and the braking system will be unique, too. The body and underfloor aerodynamics will also be enhanced to reduce drag and maximise aero efficiency.

To be built at Aston Martin’s new St Athan facility in south Wales, which will also build the company’s first SUV – the DBX/Verakai – and be home to the resurrected all-electric Lagonda brand, the Rapide E will not only benefit from WAE’s EV know how but also from a collaboration between Williams Advanced Engineering and Unipart Manufacturing Group. Under the Hyperbat Limited name the two firms have teamed up to produce the car’s batteries, with Integral Powertrain responsible for the pair of electric motors and Xtrac the transmission.

The 155 examples of the Rapide E may be a piece of showcase engineering, but despite the limited production numbers Aston’s first battery electric vehicle is a clear sign of intent of the company’s aspirations of growth post its IPO and its desire to remain relevant in a world where electrification of the car is impossible to ignore.

With Jaguar and Mercedes showing their electrification hands via I Pace and EQC models respectively, and Porsche to follow suit with Taycan later next year, Aston Martin, and more specifically Lagonda will find itself well prepared and smartly positioned when it delivers its first series-production car early in the next decade.