The Vanquish is a highly significant Aston: handbuilt but new generation and drop-dead gorgeous 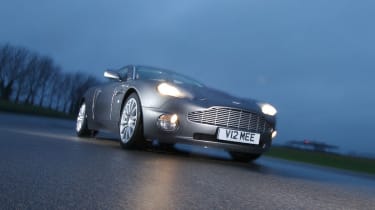 Fifty grand for an eight-year-old Aston Martin? Sounds like a bargain to me, and I’ll tell you why. We’re talking about the Vanquish, which is a highly significant Aston, being the last ever hand-built model and the last to roll out of the Newport Pagnell works. Yet it’s also the first of the new-generation cars that have driven the company’s remarkable recent growth: the Vanquish introduced the extruded, bonded aluminium and composite ‘VH’ chassis architecture that is found beneath the skin of all current models.

So, it’s a thoroughly modern Aston that promises a modern driving experience. At its heart is a proper supercar engine: a 6-litre V12 that cranks out 460bhp, and this is connected not to some muscle-building, agricultural manual gearbox but a six-speed, paddle-shift automated manual – another Aston first.

Thing is, though, you don’t need to drive the Vanquish to derive great pleasure from it. You can just stand and stare, because it’s a seriously handsome beast. Well, maybe not just stand, because although it looks good from dead front, dead side or dead rear, it’s when you move around it that you fully appreciate its waisted shape and wonderful muscularity and realise that it’s simply drop-dead gorgeous. For many, me included, it’s the high-point of modern Aston Martin design.

The interior matches the exterior for drama and is as consciously modern. There’s not a square centimetre of wood veneer to be seen, neatly tailored leather being contrasted by expensive-looking polished aluminium for the door pulls and the structural-looking centre-console grab handles. Not so appealingly there are also quite a few surfaces painted to look like metal, most notably the large, breastplate-like centre of the facia. The Ford-sourced switchgear feels a bit cheap and flimsy too and yet the overall impression is a positive one.

It feels like the exterior designers ruled the roost, the Vanquish seeming a little cramped inside, the dashboard set high, the screen pillars extraordinarily thick, yet the driving position is fine. Twist the key (another cheap Ford item) and if the gearbox is in neutral the starter button will glow cherry red. Prod it and the starter motor whirrs busily before the V12 fires with a resonant, hollow bark and settles to a loping drawl. Blip the throttle and you’ll notice how very light the pedal is, giving you your first hint that the Vanquish is more effortless mile-muncher than pure-bred sports car.

Tug back to select first, gently squeeze the throttle positively and get rolling without dallying so that the clutch is fully engaged quickly. Being an early generation automated manual, the Vanquish transaxle benefits from crisp handling so as not to overwork the clutch plate. It’s something those familiar with the car do automatically, along with selecting neutral whenever it looks likely that the car will be stationary for more than a couple of seconds.

The ’box works well once you’re on your way, cycling seamlessly up and down the gears, and there’s no shortage of punch from the big V12. The Vanquish may weigh getting on for two tons but it feels light on its toes and on these wet roads the rear tyres have a hard time getting the power down, ASC noisily active. There’s a surprising stiffness to the chassis too, the low-speed ride taut and detailed, while at speed on B-roads it exhibits a lateral rigidity that can make it feel a little unyielding over some bumps. It excels as a long-distance GT, though, getting into its stride on fast, straight roads.

There are more compelling drivers’ cars you could choose as potential long-term investments, yet given its significance in Aston’s history and its beauty, the Vanquish looks like a serious proposition at just £50K.

What to look for'A Vanquish is only as good as it has been kept,’ says Aston specialist Nicholas Mee. Cars that have lived outside reveal this with corrosion on under-bonnet aluminium, and this exposure to dampness may affect the electrics – ensure that everything works, he advises. Mechanically, the most important thing to check is the gearbox. There should be no noises, vibrations or slack, and shifts should be crisp. Used considerately the clutch can last 40,000 miles, says Mee. Which is good, because it’s a £2500 job. There’s also a big service at 45,000 miles that will cost around £3000. ‘Buy the newest and best you can afford,’ is Mee’s advice for long-term satisfaction.