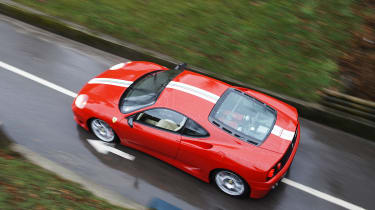 It's such a rare sight, the Challenge Stradale, yet it’s instantly identifiable, even without the (optional) tricolour stripe. Standing still it’s got attitude, the lattice-spoked wheels tucked up into the arches like the car is midway through a heavy landing, the re-worked, more aggressive nose skimming the asphalt. It makes the stock 360 look rather tame, and it’s every bit as dialled-in as it looks.

Before the Challenge Stradale came along, if you wanted Ferrari’s take on a road-biased race-car you had to fork out proper supercar money for an F40, F50 or Enzo. When it came to market in late 2003, the Stradale was significantly more expensive than the stock 360 – £133K versus £103K – yet it offered a mere 20bhp more. Admittedly, that made a rather thrilling 420bhp in total, but what really made it special was the impressively thorough approach Ferrari’s engineers had taken to make the car feel like a proper road-racer. An easy shortcut on the way to the substantial 110kg weight reduction would have been to use the carbonfibre interior trim from the 360 Challenge race cars, but the Stradale got bespoke, glossy carbonfibre of production-car standard.

Indeed, the deeper you delve, the less expensive the Stradale seems compared with the cooking 360. Carbonfibre brakes and the F1 automated manual gearbox together account for about half the price premium. The flat-plane-crank V8 is effectively blue-printed, race-car-style, with free-flowing air filters and intakes and a less restrictive exhaust that, on full throttle, is so incredibly loud that it still amazes me that it complies with any production car legislation. Just 20bhp seems small reward, but as this car’s owner says, ‘I’ve taken it to Ferrari dyno days, and it makes just under 410bhp while 360s typically make around 350bhp.’

This 16,000-miler does feel wonderfully fit, stronger than I remember, especially in the low- and mid-ranges. It’s the open-pipe, top-end blare that’s stuck in my mind, but splashing through puddles on the roads around Goodwood, there’s no chance of experiencing that. Every time I get anywhere near 5000rpm the rear wheels spin up, jinking the car a fraction sideways before ASR steps in. Blame the combination of cold, wet asphalt and sparsely treaded Pirelli P Zero Corsas.

It’s a worry. Not because the car feels like it’s going to snap away but because its owner wants to drive his cherished car home later. Right from the off, the Stradale inspires confidence with meaty, direct steering and a positive demeanour – it feels solid, low, connected, like it means business. It’s a great place to be, slotted into the high-sided seat, clutching the fat rim of the almost quartic steering wheel, using fingertips on the titanium-coloured paddles to cycle up and down the gearbox. Sure, the F1 in the Stradale isn’t as fast-acting as that of the current 430 Scuderia, but it’s smooth and quick and you can manipulate the throttle to seamlessly blend one ratio into another.

Challenge Stradale depreciation has been glacial, prices holding firm at around £110K until about a year ago. Now the least expensive ones offered for sale are priced at a fraction under £90K, the result, perhaps, of the financial turmoil and also some owners upgrading to the Scuderia. Yet just 852 Stradales were built, of which 116 were officially imported to the UK, so it’s very likely that it will be a rarer car than the Scuderia (at the latter’s launch, Ferrari said it anticipated making around twice as many, though the final figure won’t be released until production ends). It all makes the Stradale a seriously enticing proposition.

What to look forIntrinsically, the Stradale seems to be a hard-wearing bit of kit. A full service history is still essential, and check that the three-year engine belt change has been done. It’s also worth getting a Ferrari dealer to run a diagnostics test to find out what percentage worn the clutch and brake pads are; a full set of pads is around £1500 plus fitting and replacing the clutch costs around £3K. The car should also be on the recommended Pirelli P Zero Corsa tyres because anything less ruins the handling.  A clicking noise that seems to come from the glovebox is probably a ball joint, while exhaust butterfly valves can stick, requiring the replacement of the tailpipe (expensive). Other than that, it’s mostly cosmetic; the Alcantara dash top fades yet can be rejuvenated, but carbonfibre panels that have gone milky, such as those in the engine bay, can only be replaced, at great expense.