Exclusivity makes the GT3 an investment you could never wear out 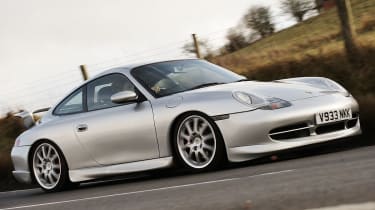 The odometer says 40,000 miles but the cockpit of the GT3 suggests much less than that. There are a few tell-tale nail scratches on the leather behind the door-pull but otherwise the interior looks almost pristine. Not glamorous or stylish in all black, a bit dull to be honest, but you don’t buy a GT3 because you can’t resist how it looks, inside or out. Most people see a regular 911 sitting low on fussy split-rim alloys and wearing a fancy bi-plane rear spoiler, but the aficionado  sees one of the most desirable Porsches of the last 25 years.

The mk1 GT3 was evo’s Car of the Year in ’99, seeing off, amongst others, the new Ferrari 360 Modena. Yet even though this car is the same colour and specification as that car – a Clubsport version with a half cage criss-crossing the carpeted, seat-less rear – it is so plain-looking in the company of the Aston and Ferrari that even I’m beginning to wonder if it was really that good.

Twist the key and the flat-six churns into life and idles with a whirring, rumbly voice that won’t quite settle to a smooth, consistent rpm. This isn’t a fault but a characteristic of the Clubsport models, which ditch the standard twin-mass flywheel for a lighter one that gives a throbby, hunting idle in pursuit of sharper throttle response.

If you’d come to test-drive the GT3 you wouldn’t yet be convinced that this almost ten-year-old 911 was worth £40K. You might remain unconvinced in the first few hundred yards, the car’s response to steering inputs feeling a little slow compared with the instant positivity of the Ferrari and even the Aston. However, I promise you that within one mile you will have changed your mind about the GT3, because it will have shown you magic.

It builds from nowhere, but build it most certainly does. First thing you notice is the ride quality. There’s firmness here but with a wonderfully judged supple edge that allows the GT3 to feel relaxed but alert and in touch with the asphalt, a quality that’s particularly appreciated on a wet day like this. Roundabout, steer left, right, left and any notion that the large-diameter, three-spoke wheel was connected to a slightly slow-ratio steering rack is banished. It feels spot-on – direct, precise and conveying a clear impression of front-end grip to your palms. Then the road offers the opportunity to give the throttle a good squeeze and you know that you’ll never tire of it.

It’s not just that there’s so much power on offer – a headline 360bhp at a thrilling 7200rpm – but that there’s so much response whatever the revs, so much character too. This is not a regular 911’s engine tweaked for more power but a bespoke version of the GT1 racer’s flat-six, with titanium conrods that help keep it smooth and safe to almost 8000rpm. You can measure out its power with what feels like bhp-perfect precision, though with the exceptional mechanical grip the 911 layout and standard-fit slippy diff confer, you can unleash an incredible amount before the rear tyres slip. Well before they do, you’ll be engaged by the GT3’s chassis, working the car and its weight distribution to keep it poised and neat and get the best drive out of corners.

So while it’s not much to look at, dynamically the GT3 is sensational. It’s a car with integrity, a car that feels solidly built and engineered, and you get terrific feel too, at a detail level through the steering, gearshift and pedals, and in the way the car rides and handles too.

It seems astonishing that only 103 made it to the UK officially, and even more astonishing that a very tidy 40,000-mile example like this one costs less than £40K. It may be approaching ten years old, but this is one future classic you feel you could use and enjoy without worrying that you’re wearing out your investment.

And if we had to choose between these three? Well, only one of them had all three of us hatching various plans to buy one. GT3.

What to look forSpeak to specialists about the GT3, Vanquish and Stradale and they will all tell you that, most crucially, you need to make sure that the car you are considering has not been crashed. At this level the difference in value between a pristine example and one that has been repaired can be substantial.

‘We won’t touch a crashed car,’ says Jamie Tyler of Porsche specialist Paragon, before going on to say that the GT3 is pretty bulletproof. ‘You want a 100 per cent service history, though,’ he says, because many have been used on track. Telltales include blueing of the tyres where tread becomes sidewall and ‘tread creep’, where the rubber on individual tread blocks has migrated to the inner edge of the blocks. You may also see hairline cracks radiating from the holes drilled in the discs. Track work will also wear out suspension components – there should be no slack in the chassis.