Bespoke supercar will be limited to ten examples, with the final model reserved as a gift to the RAF Benevolent Fund 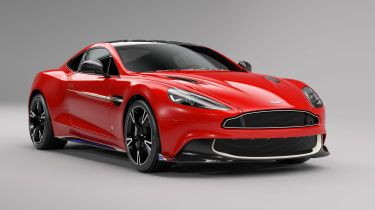 Aston Martin’s bespoke Q division strikes again. The personalisation and customisation arm of the British car manufacturer can create just about anything a customer wants on their new car, but occasionally the department takes on bigger projects – and this is one of them.

The Q division has created ten very special Aston Martin Vanquish S models to pay homage to the iconic Red Arrows. The Vanquish S Red Arrows editions have been commissioned by Aston Martin Cambridge, and each contains a hand-crafted interior and special design features to conjure up the spirit of aviation. 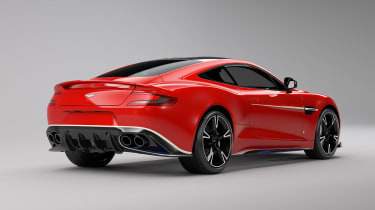 As such, each car features the same red paintjob as the Arrow’s planes, littered with aviation-inspired details. The particular shade has been named ‘Eclat’ red after the Arrow’s motto. The exposed carbonfibre roof has an inlaid ‘charge’ pattern, which mimics the canopy of a fighter jet.

White and blue carbon details abound, and there’s a white line leading from the vents in the front wings which are inspired by the Arrow’s smoke trails. The wings also feature Union flag badges. The final tweak to the exterior is a titanium exhaust system.

Inside is a totally different colour scheme, with Pinewood green seats evoking the design of a flight suit combining with green webbing seatbelts. The seat backs have an embroidered Red Arrows pattern, which is echoed on the transmission tunnel. The car does without rear seats, but that makes room for storage for two racing helmets – both finished in the Red Arrows livery. 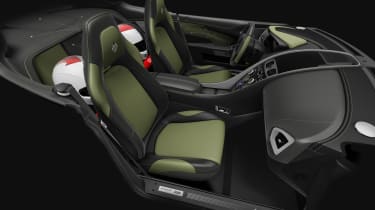 The Vanquish S Red Arrows edition also gains aviation-inspired switchware, including a bespoke rotary toggle switch in the centre console. Each car will also come with a set of Red Arrows inspired Aston Martin merchandise which could include racing suits, bomber jackets and a bespoke luggage set.

Ten cars will be built in total, but only nine will go on sale – that tallies nicely with the nine aircraft in the classic diamond formation. Each car has a unique engine plate which will be signed by the corresponding Arrows pilot in the squadron. The tenth car will be gifted to the RAF Benevolent Fund.

The RAF Benevolent fund will be raffling the car off in order to raise funds for RAF personnel past and present. You can buy tickets to the raffle here.