The next RM Sotheby’s sale will be host to some rather impressive machinery, and we’ve gathered the highlights 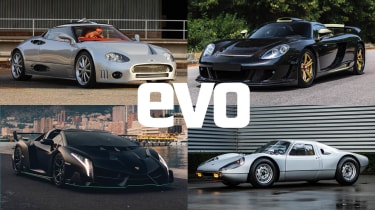 A new year is upon us, and that means another RM Sotheby’s Paris sale is just around the corner, offering up an extensive collection of automotive goods ordinarily bound to dreams.

Taking place on 5th February during Rétromobile show week, the auction has been host to record-breaking sales in previous years – 2019’s event saw a Ferrari F40 LM sell for £4.8m, the highest ever figure for the model. 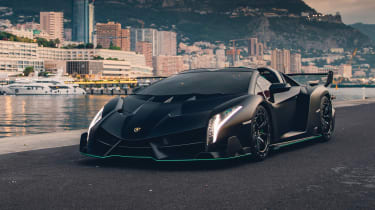 The Lamborghini Veneno won’t be for some, but with just nine roadsters built to celebrate the marque’s 50th anniversary, it’s impressive collection fodder nonetheless. Bold styling aside, the Veneno features the same 6.5-litre NA V12 you’ll find in the Aventador, only with a 50bhp bump in power thanks to larger intakes and a more free-flowing exhaust system.

This example was owned by a member of the Saudi Arabian royal family, no less, was the second topless Veneno to roll off the production line, and reads a shamefully low 279 miles on the odometer. 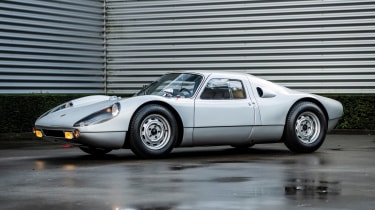 Successor to the 718 racer, the Porsche 904 made its debut in 1964 at Sebring, sporting a four-cam, four-pot engine. Not long after its launch, it went on to win the Targa Florio, also demonstrating its capabilities at the Nürburgring, Monte Carlo Rally and Le Mans.

One of only 108 produced, this example has seen plenty of action in its half-century existence, with just shy of 15,000 miles on the clock. Though it began life with the aforementioned four-cylinder, it’s now on offer with a period-correct 2-litre six-cylinder Type 906 Carrera 6 engine, after damage was discovered on the original 4-pot during its restoration.

Though its seven-figure estimate makes the £5500 list price wince-inducing, it’s fair to say that this will be an excellent collector’s piece, having been penned by Ferdinand Porsche and being the first ever Porsche to come with a glassfibre body. 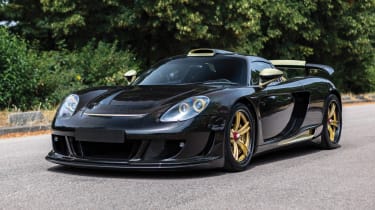 Some (OK, most) may consider the modification of a Porsche Carrera GT plain sacrilege, but that didn’t stop Gemballa. Alongside the obvious aesthetic tweaks, the German tuner added a bespoke ram air intake system, a new exhaust system and an ECU tune to coax an additional 58bhp out of the 5.7-litre NA V10, bringing total output to 670bhp and 464lb ft of torque. Fettled suspension and an updated interior also make an appearance.

As if a mere standard Mirage GT wasn’t ostentatious enough, this is a Gold Edition, featuring, you guessed it, plenty of gold. Accents can be found both inside and out, on the wheels, air intakes, door handles, gearlever, steering wheel and more. 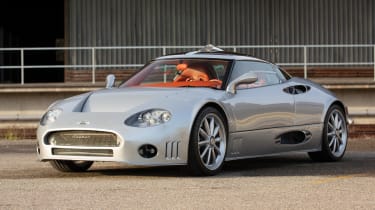 Though the small-scale Dutch car maker has been quiet in recent years, there’s no denying that Spyker made a mark on the automotive scene during its more active period. The C8 was launched at the turn of the century, featuring Audi’s 400bhp 4.2-litre NA V8, and although performance might have been similar to supercars of the time, craftsmanship and design were the real focus.

A former Spyker factory demonstrator, this 11,000-mile C8 Laviolette was one of the final examples produced during the 2001-2008 production run, finished in a subtle silver shade with a less-than-subtle Tropicana Orange trim. Of course, it also features a healthy dose of Spyker design inside too, including guilloché finishing, an exposed gear linkage and handfuls of toggle switches. 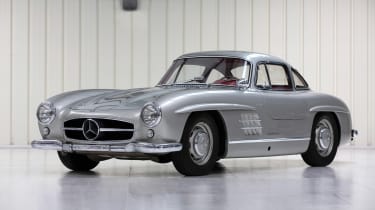 Even 2010’s interpretation of the 300 SL is fast becoming an icon, so it’s no surprise that this example is expected to sell for seven figures. First shown at the 1954 International Motor Sports Show in New York, the 300 SL uses a 170bhp, 3-litre straight-six, helping it reach its claimed 155mph top speed – a figure that made it the world’s fastest production car at the time.

This example is finished in an inoffensive silver shade with a contrasting red interior, and unlike a few examples in this sale, it hasn’t sat untouched for its entire life. In 1955, one of its lucky owners decided to take it to Lake Varpen in Sweden, not to admire the beauty of the landscape, but to set an ice speed record. He succeeded, recording a peak speed of 116mph.