Carroll Shelby’s personal car collection, including some of his own works, to go under the hammer 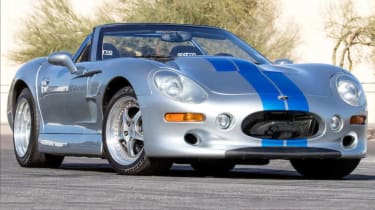 On 3 June 2018, Bonhams is presenting the Greenwich Concours d’Elegance Auction, where no fewer than 23 cars formerly owned by the late Carroll Shelby will cross the block, including a Shelby Series 1 bearing an estimate of between £74,000 and £93,000.

All lots will be offered without a reserve. However, no one is expecting the hammer to fall on low bids in light of the unique ownership history attached to the cars. The majority of them wear Shelby's name, although the collection isn't just an homage to his own creations.

A pair of De Tomaso Panteras – a GTS and GT5-S (the latter has no powertrain) – bring an Italian influence to the horde. That said, it’s the all-American Shelby Series 1, cast in the archetypal muscle car mould, that will really grab the attention of Shelby fans.

Designed and built the from ground up by the Texan, unlike Shelby’s otherwise mostly AC or Ford-derived products, it’s the truest manifestation of his performance car ideals. Shoehorned under the bulging bonnet of Shelby's own Series 1, the first of 249 to roll off the production line, sits a 4-litre V8, bolstered by a prototype supercharger that later became a $20,000 optional extra.

Power and torque supposedly stand at 600bhp and 530lb ft respectively, and thanks to the car’s sub-1300kg weight – courtesy of the carbonfibre body – this Series 1 can sprint from 0 to 60mph in 3.2 seconds.

Presented with just over 10,000 miles on the clock, it’s in immaculate condition. Further Shelby icons complete the collection: there’s an assortment of Mustangs, a prototype Dodge Charger and a 427 Cobra tagged with the highest estimate out of Shelby’s former steeds.