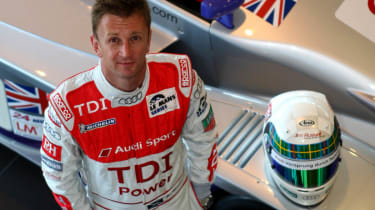 With less than a week to go before the 2010 Le Mans 24 hours, we catch up with two-times winner Allan McNish, who’s hoping to make it a hat-trick at La Sarthe in an Audi R15 TDI Plus. In part one he tells us about 2009’s race and how it’s affected the preparation for this year’s 24 hours… You finished third last year, the first time Audi hadn’t won since 2003. What went wrong? You can’t really pin it down to one thing. We had a reliability problem at the end of the race with blocked intercoolers, which hadn’t looked evident in any race or test beforehand. At the beginning of the race we didn’t have the right balance and set-up, either; it took us 12 hours to fix, and by that point the Peugeots [which won the race] were long gone. Our pace in the second half of the race was very good but by then they were running away with it. What have you took away from 2009’s race? We’ve refocused. Last year was the first time Audi had been beaten in a while, and not that we were complacent, but I think it re-emphasised how hard Le Mans is to win and gave more credibility to previous race wins. We went home, licked our wounds and returned with a very clear course of action and testing programme. So when did the preparation for 2010 begin? During last year’s race there was a discussion. Halfway through Audi boss Rupert Stadler stood up and made a clear commitment that we’d be coming back. I remember having a discussion an hour before the end of the race with one of the engineers, talking through areas to improve, and then on the Tuesday there was a debrief where we discussed how we’d be attacking Le Mans 2010. It’s nice from our point of view that the board are live in the pits, living it with us. They’re engineers, with Doctor as their title. They’re not doctors of medicine… There’s no definite start or end date to development. I emailed the guys two days ago about changes for the 2011 car, for instance. And how has this year’s preparation gone? We’ve done our endurance tests and those went very well. We ran races at Paul Ricard and Spa with the car in complete Le Mans spec. That compromised it at those two tracks, but gave us a lot of understanding of the new car and new regulations. All of our cars went to Spa with exact race line-ups – engineers, mechanics, drivers, everything. What’s your own personal regime before and during a race? I don’t actually think you can practice that sort of stuff. You’ve got to experience it and find your own way – your sleeping pattern will be totally different to mine. And there’s so much interest, attention and emotion at Le Mans you’ve got to experience it to believe it.

During the race, I rest, but never have a deep sleep. Naturally you sleep at night but not at four in the afternoon. I’ll rest my eyes but always have my headphones on – there’s always that link to the racing world out there. Physically I’ve never found Le Mans difficult, it’s one of the easiest races you do – the straights are long so you can relax. We do a lot of fitness preparation anyway, because the steering weight, average heart rate g-force are equivalent to Formula 1, so you’ve got to be strong. Le Mans isn’t for the faint hearted. Click here for part two, where Allan talks us through Le Mans now compared to when he first raced at La Sarthe, and his plans for the future…