Audi coupes – classics on display on the Audi A5 launch

Audi's coupe history doesn't stop at the TT, A5 and Quattro - these are the cars that led to the latest A5 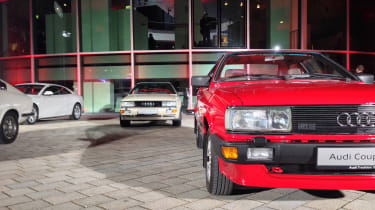 Amid the fanfare of its launch of the new Audi A5, the Audi Forum in Ingolstadt also played host to the company’s coupe heritage.

Didn’t realise Audi had a coupe heritage? Being honest, neither did we, inclined to believe it all started with the boxy Coupe of the 1980s (which spawned the famous quattro models) and continued in ernest with the TT.

But look further back and elegant two-door models appear throughout Audi’s history, and back into the days of DKWs and Auto Unions. Here's a selection of the cars on display at the A5 launch. 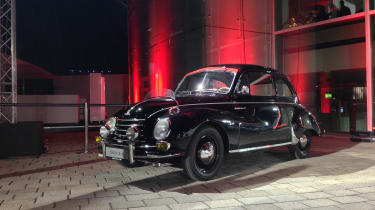 The earliest car on display was this 3=6, also known as the ‘Sonderklasse’. Built from 1953 until 1959 its classic lines hide an 896cc, inline-three cylinder two-stroke engine that powers – perhaps unexpectedly – the front wheels. Not the sportiest of vehicles on paper, but more so than contemporary rivals like the Beetle. It even enjoyed motorsport success in touring car racing and rallying during the mid 1950s. 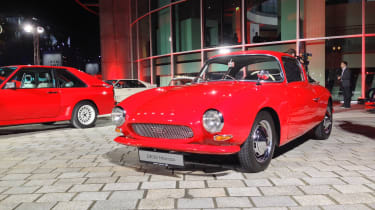 The Monza cuts a much sharper form than the upright two-door saloon profile of the 3=6 on which it was based. Its name stems from the circuit at which it achieved a series of speed records in 1956, aided by the aerodynamics of its smooth bodywork and tiny frontal area. Evidence that the company now known as Audi once made cars that could be considered ‘cute’… 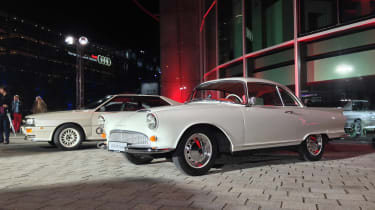 In saloon form, the Auto Union 1000 replaced the 3=6, and shared similarly austere styling. The 1959-1965 1000 Sp couldn’t have been more different, dipping deeply into the chrome and fins styling cues of American cars of the period. Power from its 981cc two-stroke three was modest at 55bhp, but it’s among the better examples of pure coupe style in Audi’s collection. 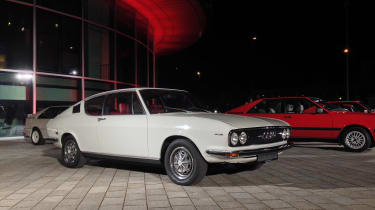 The first of Audi’s more recognisable coupe models, the Coupe S debuted in 1970. The sleek front-drive coupe developed 113bhp from a 1.9-litre engine, and over 30,000 were made by the time production ended in 1976. 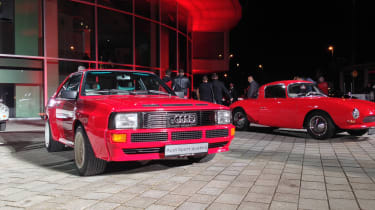 A car with which we’re more familiar. The ‘B2’ coupe debuted in 1980 but it’s the Quattro of 1984 that is rightly best-remembered. Dominant on the rally stage and brutally effective on the road – particularly when grip was low – the Quattro enjoyed constant development and culminated in the short wheelbase and belligerent box-arched styling of the Sport Quattro. Even in road trim, the Sport Quattro developed 302bhp from its 2.1-litre inline-five.

Richard Meaden drove it on some Monte Carlo rally stages in evo 034 – ‘…the Sport Quattro feels sensational, lunging between bends on a rip-tide of forced-induction thrust…whenever the stage uncoils enough to really uncork the quattro’s performance, it devours it effortlessly.’ 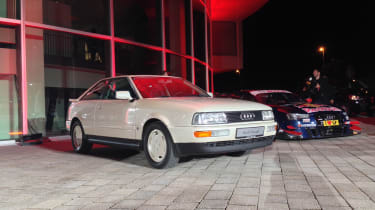 Bringing an end to squared-off 1980s styling, the Audi 80-based coupe debuted in 1988. It continued to offer five-cylinder powerplants and quattro all-wheel drive, culminating in the 2.2-litre turbocharged S2, which developed up to 227bhp. 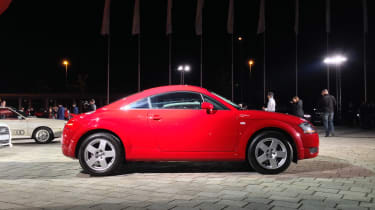 The TT is possibly Audi’s best-known coupe model. Early models like the car on display at the Audi Forum now look remarkably simple compared to the cars which followed.

While never spectacular to drive – way back in evo 009 we described it as having “five-star desirability, three-star driveability” it’s perhaps the best example of a coupe’s emphasis on style in Audi’s history. 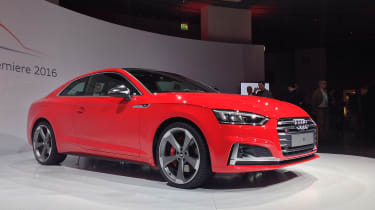 The first-generation Audi A5 launched in 2007 was less of a shock than the TT had been in 1998, though like the TT the A5 had been previewed as a concept: in this instance, the Nuvolari Quattro shown at Geneva in 2003.

The A5 never received an engine quite as mighty as the Nuvolari’s V10, but the concept’s influence is clear in the A4-based two-door coupe – an influence that continues largely unaltered in the latest A5 shown here.