Audi reveals special modified versions of its Mini rivaling A1, including a Quattro homage 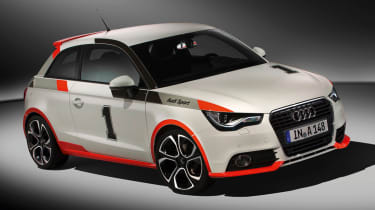 As part of the Audi A1 launch the manufacturer will be showing a range of new ‘Motto’ liveried A1s at next weeks Wörthersee Tour in Austria, a tuning event dedicated to vehicles from the VW group. Seven different A1s have been prepared, four of them featuring the 104bhp/184Ib ft 1.6-litre TDI diesel and three with the 120bhp/148Ib ft 1.4-litre TFSI petrol engine. It’s to highlight the high customisability of the A1, though a preconfigured ‘Legends Package’ is of most interest. It adds 1980s style Audi rally inspired trim featuring Amalfi White paint, Begonia Red front and rear spoilers, gloss black Number 1 decals on the bonnet and doors and period interior elements, all giving the nod towards the iconic Audi Quattro. All seven of the Wörthersee A1s have a different ‘Motto’ design, highlights including a football-themed ‘FC Bayern’ A1 in Misano Red and a ‘Pickerljäger’ A1 in Ibis White. The cars have also been fitted with a variety of elements from the Audi A1 Competition Kit accessories list. Additions include new paint options, sports exhausts, interior equipment and new aerodynamic parts. In addition to the A1s on show, Audi will also be showing off its recently announced R8 GT supercar, the freshly launched RS5 and a variety of customised TTs, A4s and A3s. The Wörthersee Tour is held in Reifnitz, Austria and runs from the May 12 to May 15. Prices for the Audi A1 start at £13,145, and sales begin in the UK this autumn, initially with just a three-door bodystyle. A five-door and a convertible are likely to follow. A five-door and a convertible are likely to follow, while our fingers are firmly crossed for hot S1 and RS1 variants. Read our thoughts and predictions on that here…

Read more about Audi A1 pricing and availability

The A1's rivals from Mini and Abarth battle it out