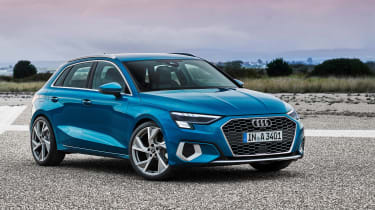 Following its launch in March, Audi has revealed pricing information for its all-new A3 Sportback. Now in its fourth iteration, it boasts fresh tech, new powertrains and an updated design. Order books are open now, with first cars set to hit the road later this year.

Though launches of the performance-oriented S3 and RS3 models are still to come, we now know that prices start at £23,300 for the base-level Technik trim, moving up to £40,330 for the range-topping Vorsprung variant.

As with all of VAG’s recent offerings, mild-hybrid options are in the pipeline, but Europe’s most potent offering at present is a 148bhp 1.5-litre turbocharged four-pot, with a 2-litre diesel in either 114bhp or 148bhp states of tune also available. All initial variants will send power to the front wheels through either a six-speed manual or Audi’s seven-speed dual-clutch gearbox. To keep temperatures down and efficiency up, certain models come equipped with a moveable air intake that opens and closes depending on the conditions.

At the bottom of the range is a 108bhp 1-litre turbocharged three-cylinder, with a plug-in hybrid and Compressed Natural Gas car expected to join the range in time – all-wheel-drive quattro will also make an appearance.

Predictably, design changes have brought the compact hatch up to speed with the rest of the range, applying a larger, hexagonal grille complete with a honeycomb pattern as seen on models such as the A1. Most notable are the new headlights, coming with digital daytime running lights when specified with the range-topping matrix LED units, a first for an Audi.

The new A3 employs Audi’s very latest tech, offering a 10.1-inch infotainment display and 10.25-inch virtual cockpit as standard, with a larger 12.3-inch virtual cockpit available at a cost. A new head-up display that projects the image over 6ft ahead of the driver also makes an appearance, alongside the 992-esque gear selector, gesture volume controls and an optional 15-speaker, 680W Bang & Olufsen Premium sound system. 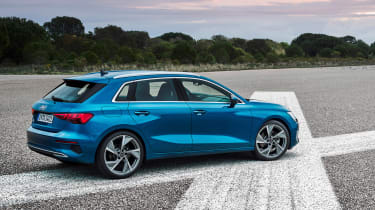 Apple CarPlay, Android Auto and Amazon Alexa will all be available, but most intriguing is the introduction of ‘Car-to-X’. The system allows the car to communicate with other vehicles and local infrastructure, providing the driver with information on parking spots, and even traffic lights. The use of three radar sensors, 12 ultrasonic sensors and five cameras also provides drivers with an array of safety and assistance features, such as advanced, lane-keeping cruise control that can operate at up to 130mph.

Adaptive dampers and variable-ratio steering can be had at an additional cost, and multi-link rear suspension comes as standard on all cars with 148bhp or more – torsion beams are what you’ll find on lesser models.

As for pricing, £23,330 will get you the base-level Technik model with 16-inch wheels. However, for 17-inch wheels and aluminium trim, you can opt for the £24,700 Sport. S line is perhaps the biggest step in the range, with £26,640 bringing 18-inch wheels, lowered sport suspension, a more aggressive bodykit and LED rear lights to the mix. The £34,905 Edition 1 adds 19-inch wheels and the matrix LED headlights, with the range-topping £40,330 Vorsprung offering the uprated Bang & Olufsen sound system and more. 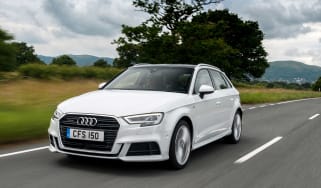