Audi’s booted A3 returns, and there’s an S3 and indeed RS3 saloon coming in the not-too-distant future 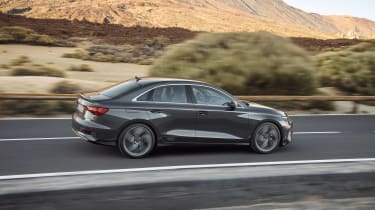 The new Audi A3 has begun its range expansion beyond the current five-door hatchback, starting with a reboot of the four-door saloon. First examples are set to hit UK roads later this year and order books are open now, with prices starting from £25,265 for the base-level Sport.

Rather than fall into the temptation of designing a sweeping coupe-like roofline, the new A3 lives up to its saloon nomenclature with a distinct three-box silhouette and upright tail. As you might expect, the saloon is longer (by 150mm) than the hatchback on which it is based, and maintains the same wheelbase, width and height as the hatch too. It’s also 40mm longer than the A3 saloon it replaces, although the wheelbase is identical, so interior space will be largely unchanged.

What has changed is the interior and exterior design, adhering to the complex new design language being implemented under Audi chief exterior designer Marc Lichte. The exterior, as with the hatchback, is dominated by the heavily sculpted wheelarches and ornate lighting graphics at both the front and rear. Wheel sizes range between 16- and 19-inch options, while Audi’s usual spread of Sport and S-line trim lines will give buyers some extra choice as to exterior design elements.

The interior is identical to the hatchback’s in design and layout too, with a new driver-focused dash that combines touchscreen interfaces and limited use of physical switches. As standard, the A3 saloon comes with two 10-inch screens, one forming the virtual cockpit behind the steering wheel. Standard physical dials are no longer available, but you will be able to upgrade the 10-inch unit to a 12.3-inch one as part of a technology pack in the UK. 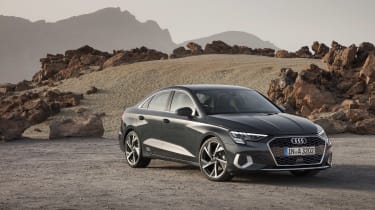 The saloon’s engines currently follow those of the hatchback, combining either a turbocharged 1.5-litre or 2-litre four-cylinder petrol engine with a six-speed manual or seven-speed dual-clutch automatic, with a sole 2-litre diesel and the base-level 108bhp 1-litre three-cylinder also on the cards. Models fitted with the DCT gearbox integrate a 48V mild-hybrid system, and cylinder deactivation is standard fit on petrol models too.

More powerful S3 and RS3 models are also on the way, both retaining the same basic powertrain combinations as were found on the previous models. RS3 saloon models will also pick up bespoke bodywork around the front axle thanks to the wider track, as we spotted on a prototype hatchback in recent days. The A3 is unlikely to be joined by a cabriolet this time around though, nor a three-door hatchback. But don’t worry, there will be an Allroad-style crossover model if one of Audi’s six other compact SUVs doesn’t appeal to you.