The Audi A3 Saloon reviewed in top spec petrol turbo form. Until the S3 arrives, anyway... 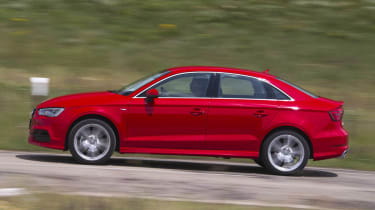 This is the Audi A3 Saloon, the first four-door iteration of the company’s C-segment car released a year into the mk3 model’s life. It rivals the recently launched Mercedes CLA and is priced to undercut it, starting at £24,275. Order books are open now.

If you’ve read any motoring press in the last 12 months you’re probably familiar with (and possibly a bit bored by) ‘MQB’, the architecture beneath all new transverse front-engined VW Group cars that cuts their development costs, resulting in yet more niche-exploring, as exemplified here. The A3 Saloon’s predominant markets will be China and North America.

Front and rear track widths are up by 20mm over the A3 Sportback, while the Saloon’s 425-litre boot is 45 litres bigger. Perhaps confusingly, Sports Suspension is 15mm lower than basic but is standard-fit, though can be deleted as a no-cost option, while sportier S-line trim comes with the option of a further 10mm drop. Each of the A3 Saloons sold at launch weighs less than 1400kg.

Engines are the usual mix of turbocharged petrols and diesels; the latter will hoover up most sales but the options for the former are more interesting. A 138bhp 1.4-litre TFSI unit with ‘Cylinder on Demand’, where two of its four cylinders are shut out during low throttle load, helps achieve a similar CO2 figure to a comparable diesel. But it’s this 178bhp 1.8-litre TFSI which acts as a range-topper until the 296bhp S3 arrives.

Audi road test cliché bingo cards at the ready: this is a car that doesn’t step out of line with the company’s typical dynamic profile at all. Firm, occasionally wheel-thumping ride? Check. Light, numb steering? Check. Safe, understeer-biased handling? Check. It’s Audi by numbers, but that brings its positives, too: the interior possesses quality and a level of feel-good factor that other VW Group cars made from a similar box of bits can’t match.

And like all Audis, this is a very easy car to make effortlessly fast progress in. Once you’re accustomed to the hard ride (we tried cars on both basic and Sports suspension; both were rather busy on anything less than blemish-free roads) this is a neat and incisive car to drive, if lacking in ultimate engagement.

The engine is far more pleasant to use than the 2-litre TDI and relatively happy to rev, though if it’s a fizzy, effervescent turbo petrol engine you’re after, the 138bhp 1.4 TFSI is a better bet, its horsepower deficit covered up by an identical torque figure. It can’t match the 1.8’s high-speed smoothness and refinement, however. The 1.8 TFSI initially comes to the UK with the six-speed S-tronic automatic only, with a manual to follow, and the twin-clutch unit actually matches the engine’s demeanour perfectly.

The A3 Saloon is a smart looking thing but not as swoopy as the Mercedes CLA, though the 208bhp CLA250 is a little more powerful and more expensive, with an estimated price north of £28,000 when it arrives in the UK.

More up our street will be the Audi S3 Saloon, which launches late in 2013. With 296bhp, a circa-5sec 0-60mph time and a limited 155mph top speed, it’s similar in size and performance to the original Audi S4.

More on A3 saloon 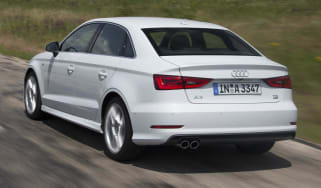 The Audi A3 gains a four-door Saloon variant to tackle the Mercedes CLA. How does it compare?
Visit/audi/a3-saloon/11586/audi-a3-saloon-concept-news-and-pictures 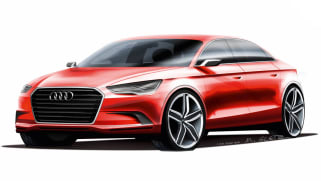 Audi unveils a 402bhp, five-cylinder turbo saloon car ahead of its 2011 Geneva show debut
Skip to HeaderSkip to Content