Pragmatic Sportback is no more fun to drive than an A3 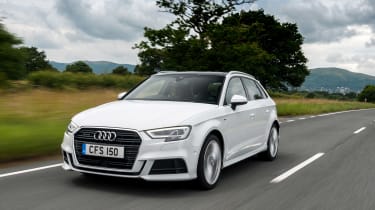 Audi created the premium hatchback with the first A3 back in 1996 and has near as damn perfected the recipe with its third generation version. Released in 2013, Audi’s habit of building cars that don’t seem to age is exemplified in this 8V generation, which despite being significantly older than its rivals still manages to better them in many key areas.

The A3 combines an interior that’s as sharp and well-built as ever, a clean contemporary exterior design and a refined and capable chassis to create a package that despite costing more than its closely-related Golf and Leon cousins is an easy purchase to justify.

But while the A3 might appeal to the mass-market, its driving experience has always been dull and a tad sterile, especially when compared to its contemporary nemesis, the BMW 1-series. Updated in 2017, the new A3 featured updated tech, subtly refreshed styling and new powertrains to the package, but has Audi improved what was actually lacking? 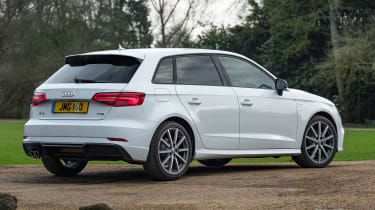 Audi A3 Sportback: in detail

While the Audi A3 Sportback might look the part and boast a cabin that is a cut above when compared to rivals, it's ultimately a pretty tame thing to drive, offering up little in the way of thrills unless you opt for the range-topping S and RS models. The latter uses a five-cylinder engine and boasts an impressive 362bhp.

Where the A3 Sportback's plus points reside is in its ability to offer levels of refinement normally reserved for a class above. Practical, with two extra doors over a standard A3 and offering a 1220-litre boot, it's also decent value at £620 over the standard car. The extra metal of the Sportback does also add another 30kg to the mix.

It's only really the five-cylinder RS version of the A3 that truly gets towards the thrill of driving but as we discovered during our testing, it's still very much within the 'fast and friendly' realm of quick Audis. The S3 too is definitely quick to drive, but the similarly priced Golf R bests it dynamically.

Whether or not you prefer the styling of the Sportback compared to the regular A3 is of course a subjective issue, but to these eyes the five-door is just a touch bulkier to behold than the three-door. This is because it is a physically longer car than the hatchback A3, at 4310mm against 4237mm. This brings with it a wheelbase stretched by 35mm, a 38mm longer rear overhang and that extra quarter-light in the C-pillar, making for a fussier glasshouse than on the A3 hatch. On the previous generation A3s, the three-door and Sportback versions had different rear light clusters entirely, whereas the current models have the same units for greater homogeny.

Don’t bank on a lot of extra room inside as a result of its exterior dimensions, though, as rear-seat passengers benefit from just 11mm more elbow room and 1mm more shoulder room. Front-seat occupants actually have more space in the three-door A3.