The all-new Audi A3 to get a new look, interior and hybrid-heavy engine range 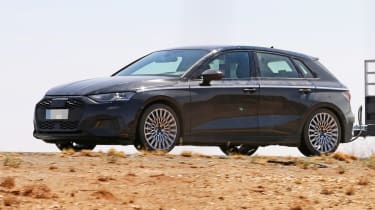 The all-new fourth generation Audi A3 has been spotted undergoing final pre-production calibration testing almost completely bereft of camouflage before its full reveal later this year. Despite the black paint, the new A3’s design is on full display, with only a crude chrome strip down the cars flank hiding a complex crease that will run between the edge of the headlight to the rear lamps.

Under the fresh skin will sit a heavily revised version of the current model’s MQB platform, one that will be shared with the incoming Mk8 Volkswagen Golf. Building on these new underpinnings, the new A3 will be longer and wider than the current model, while also incorporating a new digital architecture facilitating a new, heavily digitised interior, and extended applications of electrified powertrains.

> Click here for more on the incoming Volkswagen Golf 8

Thankfully, Audi will indeed replace the S3 and RS3 performance models, the latter likely to feature the same 2.5-litre turbocharged five-cylinder engine and quattro all-wheel drive. The S3 will also keep a similar layout to the current model, featuring around 300bhp from a turbocharged four-cylinder and all-wheel drive – perfectly placed to rival the Mercedes-AMG A35 and incoming BMW M135i. 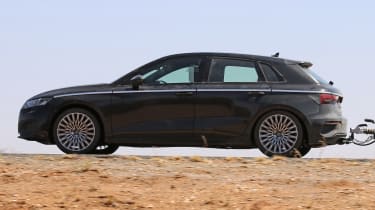 Cooking models will feature a more conservative engine line-up, likely to be split between three- and four-cylinder petrols and diesels. Some models are expected to adopt mild-hybrid elements, while a new plug-in hybrid e-tron model will also be offered. What is less likely is an all-electric A3, as Audi will instead utilise the new electric MEB platform for its own ‘premium’ version of the incoming Volkswagen ID.3.

Even though the prototype in these pictures is still entirely hidden by its swirly wrap, we can still see that the new A3’s body looks significantly wider than the current model’s, with broad shoulders and a heavily raked rear screen. The front end will combine aesthetic elements borrowed from elsewhere in the Audi range, falling into line with the new A1, Q3 and e-tron SUV.

As mentioned above, it’s the interior that’ll be the big revolution, with an all-new dash layout and architecture full of high-resolution displays and Audi’s new MMI touch infotainment system. There will be a new lower centre console too, with an entirely electronic transmission selector, although manual transmissions will still be available.

What will disappear is the three-door model – blame slow sales for that one. However, we expect the saloon, which is popular in North American and Asia-Pacific markets, to be revealed some time after the hatchback’s initial release.

We’ll find out more on Audi’s crucial hatchback later this year, but for now with a new A-class, and front-wheel-drive BMW 1-series to compete with, the premium hatchback class has never been more closely aligned, and as a result more competitive.