New Audi A4 and S4 news and pictures

Audi refreshes its A4 and S4 saloon and Avant range, in time to battle the F30 BMW 3-series 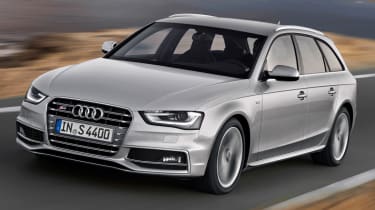 Audi has updated its A4 range. The firm’s best-seller has had a mid-life overhaul to help arm it for battle with BMW’s new 3-series.  The A4’s changes reflect those bestowed upon this year’s rejigged A5. The lights are tweaked front and rear and grilles and bumpers are changed, while inside there’s new steering wheel choices and an improved MMI infotainment system. The car’s drivetrain options are where there are more telling differences, with most engines enjoying power and torque rises despite an average fuel consumption drop of 11 per cent across the range. The introduction of electromechanical power steering yields a 7g/km reduction per car alone. While the UK’s engine details are yet to be confirmed, Audi boasts of seven diesel units, ranging from a 134bhp 2.0-litre four-cylinder TDI unit (which manages impressive economy figures of 67mpg and 112g/km of CO2) to a 3.0-litre V6 TDI with 241bhp. Petrol choices include an entry-level 118bhp 1.8-litre and the tried-and-tested VW Group 208bhp 2.0-litre turbo as well as a new 168bhp/236lb ft 1.8-litre turbo engine, which is 19 per cent cleaner than its 158bhp predecessor, with 50.4mpg fuel economy and 134g/km CO2 emissions. The Audi S4 continues to top both saloon and Avant estate ranges with a 3.0-litre supercharged V6 which combines 328bhp/325lb ft performance with 35mpg combined fuel economy. Front-wheel drive is standard in the lower echelons of the A4 range, with Quattro all-wheel drive available from the 175bhp 2.0 TDI onwards. Its torque distribution is 40:60 front:rear, while V6-equipped cars get Audi’s sport differential – which actively distributes power between the rear wheels individually during cornering – as an option. Full UK engine, specification and price details are yet to be unveiled, but expect marginal rises over the current £22,000 to £38,000 range.