Audi A5 Sportback review - does it add to the coupe's appeal? - Performance and 0-60 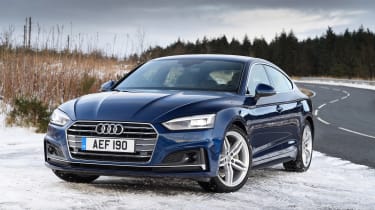 Audi’s recent form of class-leading engines continues with the A5, with all models boasting impressive stats against their immediate rivals. The entry level and most efficient 190bhp 2.0 TDi ultra manages an impressive 106g/km while still hitting 62mph in 7.9 seconds. The brawnier 3.0 TDi quattro will hit 62mph in 6.4 seconds, while the 2.0 TFSi will crack it in 6.0 seconds dead.

The 2.0-litre TDI ultra now matches the 190bhp of the 420d, while getting up to 68.9mpg (70.1mpg for the BMW) on the combined cycle. The A5 and 4-series GC trade blows power and economy wise, although like most new cars, the real world mpg will be lower and based more on how the car is driven than specification variances. 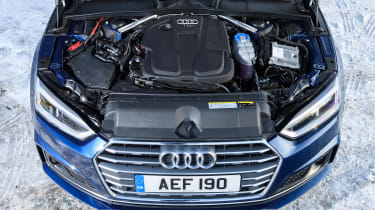 The 2.0 TDi is also available with a 7-speed S-tronic gearbox and quattro all-wheel drive if you so wish. Move up to six cylinders and Audi will offer you a 218bhp version of the 3.0 TDi paired exclusively with quattro and an S-tronic gearbox. Oddly, Audi is yet to give buyers the option of the more powerful 272bhp diesel available in the A4 saloon and estate.

For those wanting their A5 with petrol power, the 2.0 TFSi engine is also exclusively available with S-tronic and quattro. This engine produces a healthy 252bhp and returns a still respectable 45.6mpg.

If you want yet more punch, then your best option is the recently-released S5 Sportback, which packs a new 3.0-litre V6 turbo engine rather than the outgoing supercharged unit. It produces a heady 349bhp and is connected to the eight-speed ZF automatic gearbox, firing the S5 to 62mph in 4.7 seconds.