Audi A5 review - handsome coupe may be old, but still holds appeal - MPG and running costs 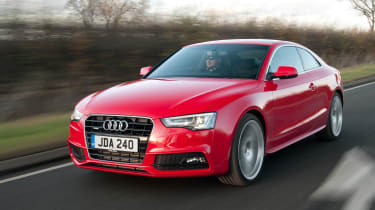 In the hugely competitive corporate marketplace running costs define sales volume. That means despite relatively high sticker prices the A5 should be a relatively inexpensive car to run. That’s driven by not just assured high residual values when you’ve finished with it and tax reduction chasing emissions and economy, but also the option of fixed price servicing packages.

With emissions output a key purchasing choice among buyers the A5 uses all the current stop-start and energy recuperation tricks to maximise economy and get the lowest emissions possible. The star of the range is the 2.0 TDI Ultra, emitting 109g/km for a 17 per cent Benefit In Kind tax payment on your company car scheme, and the annual road tax bill is a mere £20. 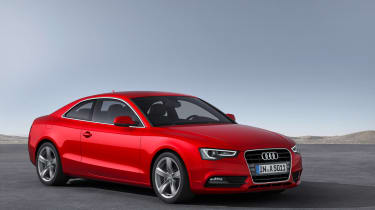 Officially that Ultra model returns 67.3mpg on the combined consumption cycle, though expect a realistic (if you’re sensible) figure around the 50mpg mark.

Obviously running costs increase as you walk up the model ladder, adding quattro to any model reducing efficiency and increasing emissions, the 2.0 TDI quattro increasing the tax burden over that ultra to 22 per cent, while adding the S Tronic auto ups it another percentage point. Don’t discount the petrol models for tax liability, with both the 1.8 and 2.0 TFSI models being competitive, with 19 per cent and 23 per cent respectively, though you’ll need to stop at the pumps more frequently, as the turbocharged petrol models typically trail the mpg figures of those TDIs by around a third.